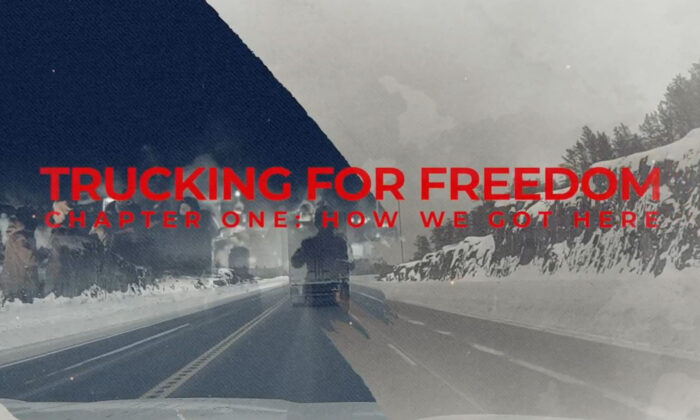 Cinema TV Series Review: ‘Trucking for Freedom–Chapter 1: How We Got Here’

Trucking for Freedom–Chapter One: How We Got Here.” (Chronicle Bros Inc.)

Since the dramatic uprising of the Canadian truck drivers who protested against their government’s draconian COVID-19 mandates and lockdown measures, the mainstream media has acted as if it never happened. Co-directors Andrew Peloso and Jeremy Regoto hope to change that with their new multi-part TV series titled “Trucking for Freedom.”

The first episode, “Chapter One: How We Got Here,” starts off by detailing the tyrannical response to the trucker’s protests. On Feb. 14, 2022, the Canadian government, headed up by Prime Minister Justin Trudeau, enacted the “Emergencies Act” for the first time in the country’s history. This extreme act allows the government to supersede such things as personal liberties to “restore order” in times of crisis.

Additionally, the Emergencies Act allows the Canadian government to do such things as conduct forced dispersals of COVID-19 protests and freeze the bank accounts of both the truckers and those who supported their cause. It also enabled the government (through various mainstream media channels, both foreign and domestic) to frame the protestors as domestic terrorists, and later, racist white supremacists, homophobes, and misogynists—a veritable grab-bag of leftist labels.

But how did things become so dire… in other words, as the narrator states, “How did we get here?” The film then goes back to when the virus was first recognized.

As with many countries, when the virus first broke out in China, people were driven to states of augmented fear by the media. Quarantines, lockdowns, and masks were measures that the officials ordered to be enacted.

From the get-go, if people even questioned the validity of these extreme measures and were “anti-science” and “lacking compassion” for their fellow human beings, they would be mocked and/or become victims of cancel culture.

But as time went on and small businesses took the brunt of the economic decline created by the lockdowns (not the virus itself, mind you) and were shuttered, schools closed, and socializing with friends and family was minimized (and sometimes altogether forbidden), people began to question the government’s public health measures, which seemed to make less and less sense.

Vaccines were conveniently rolled out and universally praised as “safe and effective” by the government, the medical establishment, mass media, and various politicians. People were told that if 70 percent of Canada’s population got “fully vaccinated,” the lockdowns would end and life would magically go back to normal. But as time went on, that percentage rose incrementally. The film shows successive media reports where officials increase that number to 75 percent, then 85 percent, then 90 percent.

But as the supposed effectiveness of the so-called vaccines began to come into question on a global scale, the medical establishment (World Health Organization, Centers for Disease Control, etc.) had to drop “immunity” from their definitions.

Despite this awakening, in Canada, Trudeau’s government doubled down on their vaccine rhetoric and “tightened the screws” on those who refused its vaccine mandates. This included new “vaccine passports,” a form of overt favoritism for folks who gave in to the government and got “the jab.”

However, the more the media pushed their coercion and shaming of people who were pro-choice, the more people began to realize that some dark forces were behind the increasingly desperate vaccine push. The normally amicable Canadian citizens finally pushed back in the form of massive pro-choice protests.

Protests begin to break out in Canada, in “Trucking for Freedom–Chapter One: How We Got Here.” (Chronicle Bros Inc.)

Soon, the vaccine passport requirements metastasized over to cross-border truckers. In response to this, some of the long-haul truckers took it upon themselves to band together in the name of personal choice, informed consent, and freedom, by forming convoys. The truckers were greeted by many supporters who not only stood in solidarity with them but also provided pragmatic support in the form of food, fuel, etc. But critics wondered how long this enthusiasm would last.

One of the things I really appreciated about this first episode is how it thoroughly introduces both the social and political climate leading up to the Canadian citizen’s protests and eventual trucker’s convoys. The directors deftly lay things out through highly informative interviews with Canadian citizens, news footage, and clips of governmental officials.

“Trucking for Freedom–Chapter One: How We Got Here” is an incisive analysis of both the average citizen’s rights and freedoms and their governments’ constant push to usurp them. Interestingly, this is done through the lens of Covid-19 lockdowns and mandates.

The episode has a cliffhanger ending that elicits interest and anticipation to see the next episode, which I personally hope to watch soon.