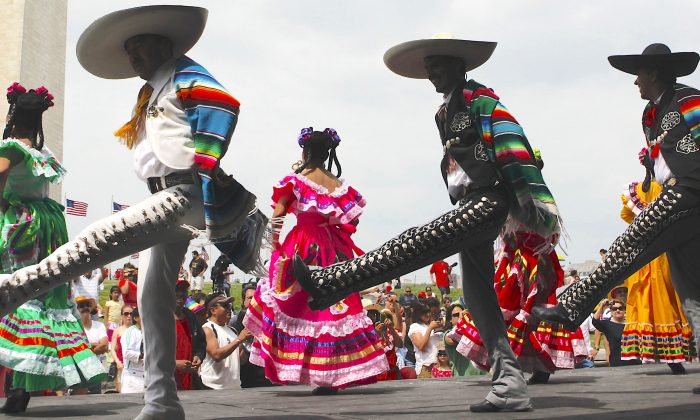 Members of the Maru Montero Dance Company perform at the Sylvan Theater near the Washington Monument during the 18th Annual National Cinco de Mayo Festival in Washington Sunday, May 2, 2010. (AP Photo/Pablo Martinez Monsivais)
US

Everybody seems to have fun, including companies, who make good money selling alcohol, and avocados for guacamole. In 2013, beer sales totaled $658 million, according to Marketplace.

However, there are some common misconceptions about the holiday.

Here are 5 things you should know about Cinco de Mayo:

May 5, 1862, was the Battle of Puebla, in which French forces of Napoleon II were defeated by poor, indigenous residents of the Southeast state of Puebla. The conflict began because Mexico had declared a temporary suspension on debt repayment, which led to the English, Spanish, and French troops to invade the country. By April 1862 the English and Spanish had withdrawn, but the French refused. On Cinco de Mayo, about 1,000 French troops were killed and marked a symbolic victory for the country. However, France did not leave Mexico completely until 5 years later. The independence day in Mexico is September 16, and was marked 50 years prior to the Battle of Puebla.

Cinco de Mayo is one of the most anticipated Mexican holidays in the #US. Find out what we really celebrate this day pic.twitter.com/UMIiDJUTpY


2. It’s Not as Popular in Mexico as It Is in the United States

Cinco de Mayo became another version of St. Patrick’s Day in the United States and is widely celebrated, especially in major cities. However, the day is not a federal holiday in Mexico and is not as greatly celebrated, other than where the battle occurred in 1862. In Puebla, the holiday is celebrated with speeches, reenactments of the battle, food, and folklore dances.

3. How It Became Popular in the United States

The holiday is a symbol of pride and strength among Mexicans and Mexican-Americans in the United States, which is why people of Mexican descent began celebrating it north of the border. But the holiday instead became a beer-fest day.

“Beer companies have been largely responsible for the commodification of Cinco de Mayo. I mean, they spend millions and millions of dollars in Spanish-language advertising,” said Jose Alamillo, a professor of Chicano studies at California State University Channel Islands, according to Marketplace.

4. It’s Celebrated in the White House

Cinco de Mayo is even celebrated by U.S. presidents. Each year, the holiday is commemorated at the White House, with remarks from presidents reaffirming their political ties with their neighboring country. There are also musical acts by famous Latin-American musicians. This year, the top-selling, Grammy award winning Latin rock band Maná will perform at the White House.

5. Tacos Are Not the Only Cinco de Mayo Dish

Tacos are on special all over, but in Puebla the main dish is Mole (MOH-lay) Poblano. The authentic dish consists of a sauce made with three different types of Chile, spices, and a touch of chocolate, smothered over chicken or turkey. The centuries-old recipe for the regional dish is usually passed down from generation to generation, and everybody has a different take on Mole.