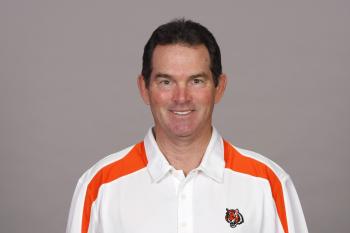 Cincinnati Bengals’ defensive coordinator Mike Zimmer’s wife died late Thursday night, but the long-time coach managed to make the trip to Baltimore with the team. He took home the game ball after a 17–14 win over the Baltimore Ravens Sunday afternoon.

Mike Zimmer received the game ball from the Bengals head coach Marvin Lewis in an emotional scene in the locker room where a team, well loved by Vikki, Zimmer’s wife of 27 years, came together to pull off a win against the favored Baltimore Ravens.

“She’s up there now in heaven smiling at you. Win or lose, she loved these guys. I was in their house on Thursday afternoon, and there were Post-It notes all around and treats for the players.

“And I reminded those guys of that Friday morning. I said that they were always on her mind,” Lewis said in a press conference.

Mike Zimmer went home on Friday to find his wife no longer breathing. No foul play is suspected and no further details have been released.

Vikki Zimmer leaves behind a son and two daughters.