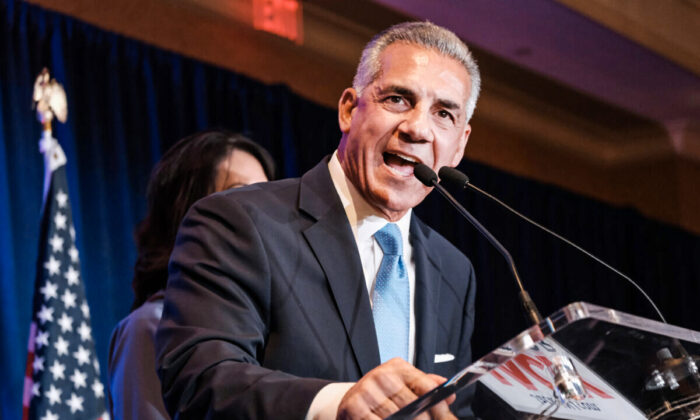 Ciattarelli Not Conceding to Murphy Yet, Says Election Result Will be ‘Legal and Fair’

New Jersey’s Republican gubernatorial nominee Jack Ciattarelli is not conceding to Gov. Phil Murphy at this time, arguing the race is too close to call.

Murphy leads Ciattarelli in the vote count by about 1 percent with tens of thousands of ballots yet to be tallied.

“The governor’s victory speech last night was premature. No one should be declaring victory or conceding the election until every legal vote is counted,” Ciattarelli said in a video to supporters posted on social media on Thursday night.

Murphy was projected the winner by the Associated Press and some other outlets on Wednesday and the Democrat, currently in his first term, declared victory.

Ballots will be accepted through to Nov. 8, according to the New Jersey secretary of state’s website, and official results won’t be certified until next month.

Murphy told supporters in Asbury Park just before midnight that he was “humbled to be the first Democratic governor re-elected in the great state of New Jersey since my dear friend, the late governor Brendan Byrne, did this in 1977.”

Stami Williams, the Ciattarelli campaign’s communications director, noted that just 24 hours earlier, Murphy had said that “we’re going to wait for every vote to be counted and that’s how our democracy works.”

Ciattarelli said the plan was to let the counties still tallying ballots continue and informed supporters that his campaign has people watching over the counting.

Any decision on a recount or audit will come at the end of that process.

The Republican also urged people not to “fall victim to wild conspiracy theories or online rumors,” though he said “any and all credible reports” would be considered and noted that any irregularities could be reported to a hotline set up by the New Jersey Republican Party.

“What’s most important is for everyone to be patient and let the process play out,” he said. “Know this—my team is comprised of some of the best legal and political experts in the country. I promise you, whatever the outcome, the election result will be legal and fair.”