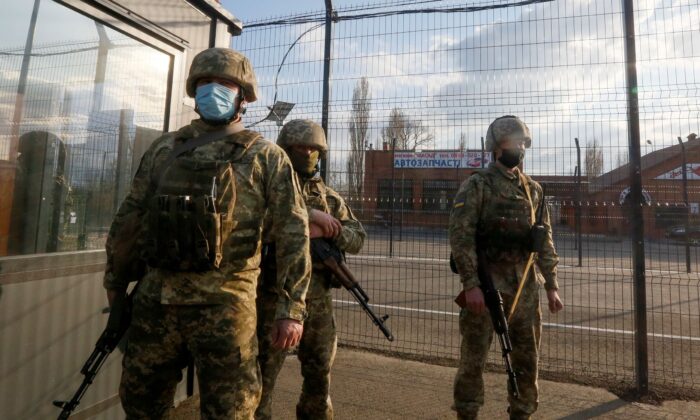 Burns conveyed the message to the officials that the U.S. was closely monitoring the situation during his Nov. 2 meeting in Moscow, reported CNN. He also spoke with Ukrainian President Volodymyr Zelensky the next day in an attempt to defuse tensions, the network added.

Concerns were raised after satellite images taken by Maxar Technologies, based out of Westminster, Colorado, showed an irregular massing of tanks, artillery, and troops in the Russian town of Yelnya.

Based on reports from Ukraine’s Defense Ministry, there were almost 90,000 Russian troops positioned along the Ukrainian border and near the eastern parts of the country where pro-Russia separatist rebels are in control.

Kremlin spokesman Dmitry Peskov rejected the reports of any possible buildup, saying there was no need to “waste time” on “low-quality” claims, reported AFP.

On the public front, Ukraine has downplayed the issue with Ukraine’s Defense Ministry on Nov. 2 saying that Russia had a practice of “accumulating military units for the purpose of maintaining tension in the region.”

But some members of the U.S. government have shown concern that Russia might be preparing for a major escalation.

“It is certainly an unprecedented buildup, and if Russia wanted to invade Ukraine, it has the capability and capacity to overwhelm Ukrainian forces,” a senior congressional aide told CNN. “With such a large buildup, Putin could order an invasion at any time and there would be very little warning.”

“With the recent massing of Russian forces on the Ukrainian border, we urge your administration to take immediate and swift action to provide support to Ukraine in the form of intelligence and weapons,” they said.

They also “urged” the administration to “deploy a U.S. military presence in the Black Sea to deter a Russian invasion.”

After Russia’s invasion of the Crimean peninsula in 2014, the international community is wary of any actions by the country’s military. The Ukrainian army has been engaged in conflicts with pro-Russian separatists since the annexation.

After the recent flare-up early this year, Russia positioned around 100,000 troops on Ukraine’s borders. The troops were eventually withdrawn following international pressure but the pullback was limited. The conflict has, till now, left more than 14,000 people dead.