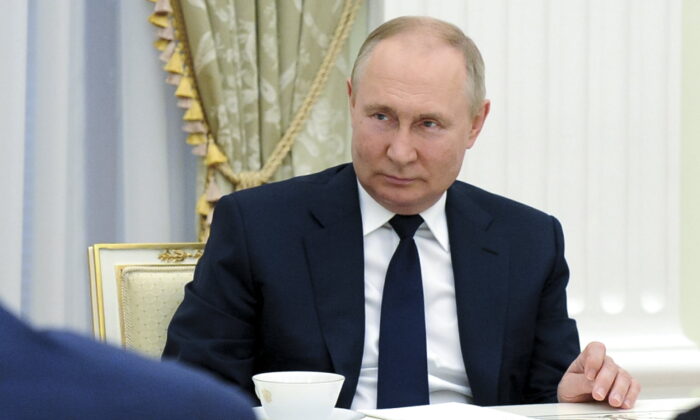 Russian President Vladimir Putin speaks to winners of the Leaders of Russia Competition, the flagship project of the Russia—Land of Opportunity presidential platform in the Kremlin in Moscow, Russia, on July 7, 2022. (Mikhail Klimentyev, Sputnik, Kremlin Pool Photo via AP)
Russia-Ukraine War

The head of the Central Intelligence Agency (CIA) responded to frequent claims that Russian President Vladimir Putin is in poor health amid the conflict in Ukraine.

CIA Director William Burns told an audience that Putin was “entirely too healthy” and made note of the rumors, which are often featured in UK tabloids. Earlier this year, there was speculation and anonymously sourced reports that alleged Putin, 69, was suffering from some form of cancer and even was allegedly bathing in the blood of deer antlers to deal with the ailment—a rumor that has never been officially confirmed.

“There are lots of rumors about President Putin’s health, and as far as we can tell, he’s entirely too healthy,” Burns said, according to media reports.

But the CIA director, a former diplomat who was stationed in Moscow, said that his remark about Putin was “not a formal intelligence judgment.” Burns made the remarks at the Aspen Security Forum in Colorado on Wednesday.

And on Thursday, Kremlin spokesman Dmitry Peksov issued a similar comment and said Putin is in good health.

“Everything is fine with his health,” he said in response to a question at his daily briefing. “You know that Ukrainian information specialists, and American and British ones, have been throwing out various fakes about the state of the president’s health in recent months. These are nothing but fakes,” he added.

During his speech, Burns also elaborated on what Putin might be thinking during the months-long war in Ukraine.

“He believes the key to doing that is to recreate a sphere of influence in Russia’s neighborhood and he cannot do that without controlling Ukraine,” he said.

In February, two days before the launch of the war in Ukraine, Putin released a speech saying that he believes the Kyiv government is getting too close to NATO and accused the military bloc of continually expanding eastward. The Russian president, who described the invasion as a “special military operation,” added that Ukraine’s government had persecuted Russian speakers in the country following the 2014 color revolution that toppled a Putin-friendly government and replaced it with one that’s more aligned with the West.

Burns added, “Putin really does believe his rhetoric. I’ve heard him say this privately over the years that Ukraine is not a real country.”

After nearly six months of conflict, U.S. estimates suggest that Russia has lost 15,000 troops while some 45,000 have been injured, according to the CIA chief.

“And, the Ukrainians have suffered as well, probably a little less than that. But, you know, significant casualties,” he added.

Burns noted that Moscow has adapted following significant tactical failures during the start of the conflict and is now concentrating on the eastern Donbass region.