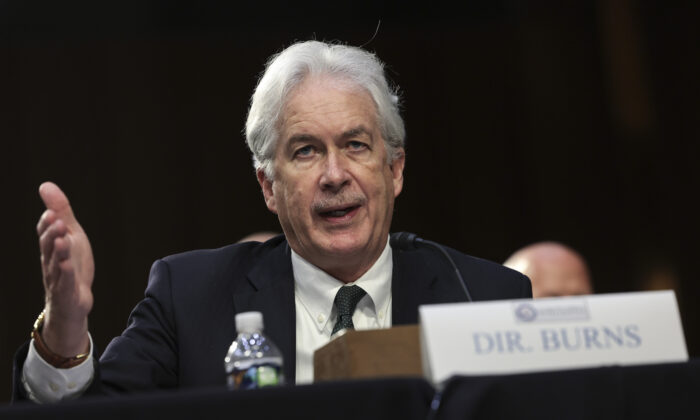 CIA Director William Burns said at the Aspen Security Forum in Colorado on July 20 that he does not think communist China would invade Taiwan immediately after the 20th National Congress of the Chinese Communist Party (CCP) in the fall. However, he warned not to underestimate CCP leader Xi Jinping’s “determination” to take over Taiwan eventually.

When asked at the forum whether an increasingly militarized China would take action against Taiwan, Burns replied: “I wouldn’t underestimate President Xi’s determination to assert the People’s Republic of China’s control over Taiwan. I think he’s determined to ensure that his military has the capability to undertake such an action, should he decide to move in that direction. I think the risks of that become higher, it seems to us, the further into this decade that you get.”

He added: “I think the Chinese leadership is trying to study the lessons of Russia’s invasion of Ukraine, and what it tells them. I think our sense is that it probably affects less the question of whether the Chinese leadership might choose some years down the road to use force to control Taiwan, but how and when they would do it.”

Since Russia’s invasion of Ukraine, the international community has been worried that China would soon invade Taiwan.

Burns said that the Russia–Ukraine war was a “strategic failure” for Russian President Vladimir Putin, who predicted he would take Kyiv within a week, and that the war may have “unsettled” Beijing.

He pointed out that what the CCP might learn from the war is that “you don’t achieve quick, decisive victories with underwhelming force.” In light of this, Burns assessed that Xi would not immediately invade Taiwan after the CCP’s congress.

“The lesson that the Chinese leadership and military are drawing is that you’ve got to amass overwhelming force,” he said. “If you’re going to contemplate that in the future, you’ve got to control the information space, you’ve got to do everything you can to shore up your economy against the potential for sanctions—even though the Chinese economy, as you know, is far stronger and more entangled with economies around the world than Russia’s ever was—and you’ve got to do everything you can to try to drive wedges across the Indo-Pacific, between the United States and its allies.”

“So, we shouldn’t underestimate, I think, President Xi’s determination on that score, but that’s short of a prediction that … right after the party Congress was going to be action. I don’t believe that’s the case.”

Burns also pointed out the unexpected effects of the Russia–Ukraine war that might deter the Chinese communist regime, which he said is “unsettled by the economic uncertainties that the war has unleashed around the world in the year 2022, when I think Xi Jinping’s main concern is getting through a very important Party congress in the autumn and having a relatively predictable global economic landscape.”

In addition, he said that the regime is “unsettled also by the fact that Putin has driven Europeans and Americans closer together … since they had banked on their ability to play off some Europeans against Americans as well.”

CCP: China and Russia Are Not Allies

Meanwhile, Qin Gang, China’s ambassador to the United States, tried to downplay Xi’s statement about the China–Russia relationship at the Aspen Security Forum. Qin said that the outside world had misunderstood the relationship between China and Russia, which was previously described by Xi as “no limit, no restricted area, and no upper limit.”

“This is a misunderstanding of Sino-Russian relations,” Qin said. “The relationship between China and Russia is not an alliance.”

Burns pointed out that the CCP’s support for Russia was mainly economic, not military.

“I think the Chinese have certainly stepped up their purchases of Russian energy,” he said. “They’ve been generally very careful, at least as we see it, at not running across the potential for sanctions against them. On the military side, they’ve been very cautious, from what we can tell.”

In his speech at the Aspen Forum, Qin blamed the United States for the increased tension over the Taiwan Strait due to its support for Taiwan.

U.S. President Joe Biden announced on Wednesday that he intended to meet with Xi “in the next 10 days.”

“It’s a very good thing, I think, that our two presidents are going to engage with one another,” Burns said. “I’ve learned over many years that even in the most complicated and often dangerous rivalries, it’s important to talk to one another, to try to reduce the dangers of inadvertent collisions, and to try to create the kinds of processes and habits of talking to one another that can at least reduce some of the worst dangers of escalation.”