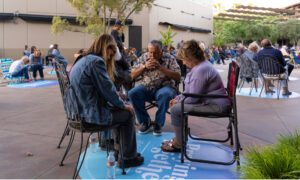 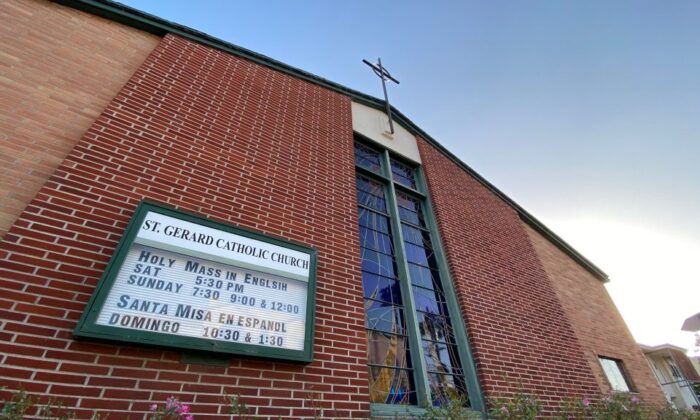 An old sign advertising the time for mass on the facade of the closed St. Gerard Majella Catholic Church in Los Angeles on May 23, 2020. (Chris Delmas/AFP via Getty Images)
Southern California

When COVID-19 restrictions were first imposed on houses of worship last March, California churches complied. But when they saw social justice protests, large retail chains, and grocery stores open, many began to wonder whether Gov. Gavin Newsom’s stay-at-home orders had been unfairly executed.

Some churches reopened their doors on Pentecost Sunday, defying the state’s orders. Others opted to stay closed.

Pastor Ché Ahn, the founder of Harvest Rock Church and Harvest International Ministry in Pasadena, decided to take Newsom to court. He won—and as a result, the state can no longer place discriminatory COVID-19 restrictions on church services.

The settlement judgment, issued on May 17, is the first statewide injunction in the country against restrictions on churches and places of worship. Liberty Counsel, the nonprofit representing Harvest Church and Harvest International Ministry, will also receive $1.35 million in legal fees reimbursement from Newsom’s Office.

Ahn told The Epoch Times that the financial settlement is a blessing—but the permanent injunction, which says the state can “never lock down the church again, no matter what,” is most important.

“If another governor tries to lock down the church, he will be violating the law of this land, because not only the Supreme Court but the District Court ruled all of this,” he said. “There is a permanent injunction, and that sets a precedent for the rest of this nation, not just California. So it’s a tremendous victory for the church and for religious freedom.”

The judgment prohibits the governor from issuing or enforcing regulations issued with the COVID-19 State of Emergency that impose any “capacity or numerical restrictions on religious worship services and gatherings at places of worship,” unless hospital admissions for children under 17 rise drastically, or statewide case rates climb above 25 per 100,000 people while intensive care unit (ICU) bed capacity drops below 20 percent for a four-week projected total. In these cases, any restrictions would be equal to those imposed on other “similar gatherings of similar risk.”

Ahn said his church decided to sue Newsom “because we feel that the church was discriminated against from the very beginning by being declared not essential.”

“When Newsom did a press conference right after the first major protests, he made statements like, ‘Your First Amendment rights must be protected. Your voices must be heard, you will be protected. We will not arrest you,’” Ahn said.

“And then he said, ‘God bless you.’ When he said those things, we’re thinking to ourselves, ‘Well, what about our First Amendment rights?’”

Ahn said he received multiple threats from Pasadena’s criminal prosecutor when the church reopened its doors last year. The city representative said the church would be fined up to $1,000 daily, and attendees would be at risk of being arrested.

The situation caused him to reflect on his father’s journey, he said. His father was a prisoner of war in North Korea who escaped when the U.S. Army pushed the North Koreans back to the Chinese border and millions came through South Korea.

“So, I’m thinking to myself, ‘This is madness. I’m not in North Korea, I’m not in communist China, this is the United States,’” he said.

Ahn said his church struggled during the lockdowns, even though services were held online. Its marriage counseling services became busier. And church is not meant to be attended online forever, he said.

“Just watching … you really cannot function as a church,” he said. “For believers to say that it’s nonconsequential for us to need the church … that’s nonsense. We are human beings, we are created for relationships.”

Pastor Jack Hibbs of Calvary Chapel Chino Hills, which also remained open last year, told The Epoch Times previously that “this has never happened in the history of America, where the church has been sequestered, let alone citizens.”

“A church of our size, people are depressed, people are having marital problems now. There’s people that are saying, ‘I can’t live like this; my boss told me I’m not essential; I feel like I’m going to kill myself,’” Hibbs said.

A representative for Newsom defended the governor’s handling of the pandemic restrictions.

“Governor Newsom has always put the health and well-being of Californians first, resulting in the lowest positivity rates in the country and over 36 million shots in arms—more than any other state,” a spokesperson for Newsom’s office told The Epoch Times in an email.

“This settlement resolves this case while providing clarity and certainty to the public around the public health standards applicable to places of worship following recent rulings by the U.S. Supreme Court. California has led the nation in safely reopening because our decisions are based on what the science and data tells us, and we will continue to do so as we look beyond the Blueprint.”

Newsom has announced plans to reopen the state fully on June 15, lifting many restrictions for establishments. Mask-wearing will still be required.