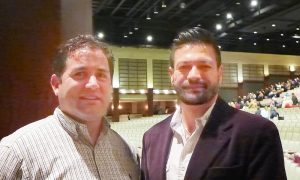 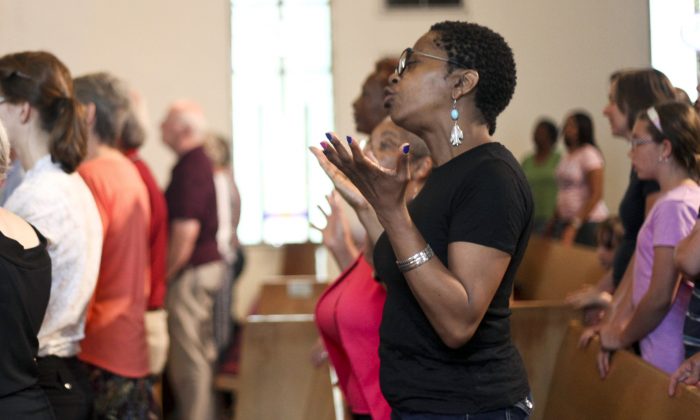 People attend a service in remembrance of the nine people killed in Charleston, S.C., Wednesday, June 24, 2015, at the African Methodist Episcopal Church in Kalamazoo, Mich. (Daytona Niles/Kalamazoo Gazette-MLive Media Group via AP)
US

CHARLESTON, S.C. —The site of a massacre a week ago, the Emanuel African Methodist Episcopal Church is being reclaimed by parishioners who are pledging to remember the loved ones they lost in a shooting rampage while carrying on the work of the beloved pastor who was slain beside them.

Only hours before the body of state senator and pastor Clementa Pinckney was to be returned to the historic black church one last time for his wake, members of his flock and non-church members alike packed into the church’s basement to attend Wednesday night Bible study.

It was the very same thing that was taking place a week ago before Pinckney and eight parishioners were gunned down in what authorities are investigating as a hate crime.

“Because of our faith, we’ve shown up once more again to declare that Jesus lives and because he lives, we can face tomorrow,” interim pastor Norvel Goff told a multiracial crowd that swayed, clapped and sang in the same room where the shooting occurred. Among the worshippers were several family members of one of the victims, Myra Thompson.

“It is a powerful testimony that they are able to come,” Goff said of Thompson’s relatives, who were applauded by others in the audience.

The first funerals of some of those slain were to begin Thursday at nearby churches in North Charleston, with a viewing for Pinckney inside Emanuel on Thursday evening. President Barack Obama will deliver the eulogy at Pinckney’s funeral Friday at a nearby college arena.

In the church’s basement Wednesday evening, there was little evidence of the violence that had taken place there just seven days before. Workers at the church puttied over bullet holes in the wall and removed other traces of the attack before inviting the public back in, church spokeswoman Maxine Smith said.

Just before the Bible study began, volunteers brought in a large wooden cross covered with notes of sympathy from well-wishers. A table in front of a small pulpit overflowed with roses, lilies and other flowers and plants. Propped up in front of it was a poster bearing written expressions of sympathy for Pinckney and the eight slain parishioners.

The 41-year-old minister on Wednesday became the first African-American since Reconstruction to rest in honor in South Carolina’s Statehouse Rotunda. Pinckney served the people from the Statehouse for nearly 20 years, first as a page, then a state representative, and later a senator. Prior to a public viewing that authorities say drew 4,000 mourners, his widow and two young daughters met a horse-drawn carriage carrying his body.

As mourners filed by his open casket, a makeshift drape over a huge second-floor window obscured the secessionist battle flag outside on the Statehouse grounds, emphasizing how quickly this symbol of Southern pride has fallen into official disrepute.

In state after state, the Confederate symbols that were seemingly embraced by the suspect in the killings, have suddenly come under question.

Dylann Storm Roof was captured a day after the shootings when a motorist spotted his Confederate license plate. Images on a website created in Roof’s name months before the attacks show him posing with the Confederate flag and burning and desecrating the U.S. flag. He also poses at Confederate museums, former slave plantations and slave graves.

He compared the banner to the universally shunned symbols of Nazi Germany, a stunning reversal in a region where the Confederacy was formed 154 years ago and where Jefferson Davis was elected president.

The iconic Confederate battle flag in particular “is offensive to some people because unfortunately, it’s like the swastika; some people have adopted that as part of their hate-filled groups,” Bentley said.

Both of Mississippi’s U.S. senators have endorsed removing the Confederate symbol from the flag the state has flown since Reconstruction — despite a 2001 endorsement of the symbol by state voters.

Other lawmakers and activists took aim at symbols including a bust of Confederate general and Ku Klux Klan leader Nathan Bedford Forrest in Tennessee’s Senate, a sculpture of Confederate President Jefferson Davis in the Kentucky Rotunda, the vanity license plates used by thousands of motorists, and Minnesota’s Lake Calhoun.

Businesses also have acted swiftly. Wal-Mart, e-Bay, Amazon, Target and Sears are among those saying Confederate merchandise will be gone from their stores and online sites. And Warner Bros. announced it will no longer license toy cars and models of the “General Lee” car with the Confederate flag on its roof that starred in the 1980s TV show “Dukes of Hazzard.”

Ben Jones, the actor who played Cooter on the TV series, said these symbols are under attack by a “wave of political correctness” that is vilifying Southern culture. He said Confederate items will never be removed from the Cooter’s Place stores he owns in Tennessee and Virginia.

Republican Jonathon Hill, a freshman South Carolina representative, also said the flag should remain above the monument to fallen Confederate soldiers, and that addressing it now disrespects the victims’ families.

“Dylann Roof wanted a race war, and I think this has a potential to start one in the sense that it’s a very divisive issue,” Hill said.

A growing number of Confederate symbols have been defaced by graffiti.

The words “Black Lives Matter” were spray-painted Wednesday on a century-old Confederate memorial in St. Louis, not far from Ferguson, Missouri, where the phrase took root after a white officer killed an unarmed black man last August. In Charleston, the words “racist” and “slavery” were painted Tuesday on a monument to Calhoun, just a block from where the Emanuel AME church stands on Calhoun Street.

Goff used his time at Emanuel’s Bible study to call for continued calm in Charleston in the face of the tragedy.