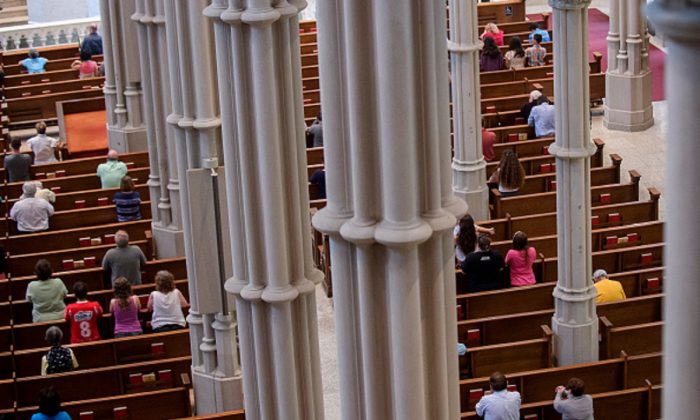 Parishioners worship during a mass to celebrate the Assumption of the Blessed Virgin Mary at St Paul Cathedral, the mother church of the Pittsburgh Diocese, in Pittsburgh, Pennsylvania, on Aug. 15, 2018. (Jeff Swensen/Getty Images)
US News

NEWARK, N.J.—New Jersey’s five Roman Catholic dioceses listed more than 180 priests on Feb. 13, who have been credibly accused of sexually abusing minors over a span of several decades, joining more than two dozen other states that have named suspected abusers in the wake of a landmark grand jury report in Pennsylvania last year.

The lists released Wednesday identified priests and deacons who served in the dioceses of Camden, Trenton, Metuchen, and Paterson and the Archdiocese of Newark. Many priests on the lists are deceased, and others have been removed from ministry.

Cardinal Joseph Tobin, the archbishop of Newark, which listed 63 former priests, said in a statement that he hoped the disclosure “will help bring healing to those whose lives have been so deeply violated.”

State Attorney General Gurbir Grewal formed a task force in the fall to conduct a criminal investigation into sexual abuse by clergy in the state, shortly after a Pennsylvania grand jury report identified over 300 predator priests and more than 1,000 victims in that state.

“While this is a positive first step towards transparency and accountability, I hope this spirit of openness continues during the course of our ongoing investigation and in response to our requests for records and information,” Grewal said in a statement Wednesday.

Newark’s list includes Theodore McCarrick, a former Newark archbishop who served as archbishop from 2000 to 2006 in Washington. McCarrick was removed from public ministry in June.

The lists released by the diocese don’t include details about specific allegations or when they are alleged to have happened; rather, any details about the named priests and the crimes of which they are accused come from court records or previously published reports.

Several priests who served in the Newark archdiocese have been accused of molesting boys as part of their volunteer work with Boy Scout troops, according to published reports. Others named in the release were arrested, convicted or pleaded guilty and were returned to service after probation or treatment, according to court records and published reports.

Carmen Sita changed his name to Gerald Howard after being sentenced to probation and receiving treatment and began serving as a priest in the Jefferson City, Missouri, diocese where he was assigned to a parish attached to a school. He was later accused of abusing teenage boys and was convicted a second time. The Missouri diocese reported Howard is currently incarcerated.

Former priest Richard Mieliwocki, who was convicted and sentenced to probation, disappeared after starting counseling and resurfaced when he was accused of molesting teenagers as a counselor in an in-patient substance abuse program.

Another priest named Wednesday, Manuel Gallo Espinoza, was indicted by a grand jury in 2016 after admitting to at least one allegation of abuse. He fled to Ecuador, and a warrant was issued for his arrest.

The Archdiocese of Newark, New Jersey, has released a list of 63 Roman Catholic clergy members they say have been credibly accused of sexually abusing minors dating to 1940. https://t.co/WYk203Cucg

Mitchell Garabedian, an attorney who has represented alleged victims in New Jersey, said the release of names isn’t enough.

“Given the vast number of priests named as sexual abusers and the span of time in which the sexual abuse took place, it is fair to state that the Archdiocese and Dioceses in New Jersey have forgotten how to be moral and kind with children,” he said in a statement.

Nearly 2,000 accused clergy members and others nationwide have been identified since and including the Pennsylvania grand jury report, a review by The Associated Press found.

By David Porter and Claudia Lauer