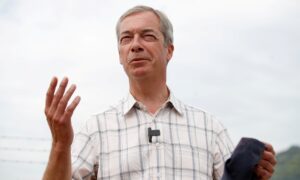 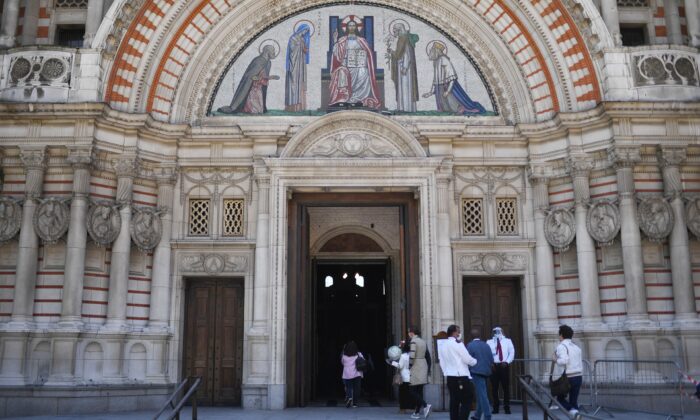 Worshippers queue to enter Westminster Cathedral for Sunday Mass on the first Sunday since CCP virus lockdown restrictions were eased to allow for communal prayer, in London, UK, on July 5, 2020. (Daniel Leal-Olivas/AFP via Getty Images)
UK

The forced closure of places of worship by the UK government breaks the law, 71 Christian church leaders in England said on Monday. They will seek a judicial review of the measure, which is part of a planned national lockdown, if it is implemented on Thursday.

The government website subsequently published guidance for the new measures, in which it states that places of worship will be closed unless they are being used for funerals, broadcasting acts of worship, individual prayers, formal childcare or where part of a school, essential voluntary and public services such as blood donation or food banks, and other exempted activities such as some support groups.

If the measures are passed in Parliament on Wednesday, they will take effect on Thursday.

“These restrictions will once again make it a criminal offence for Christians to gather for worship or prayer, or to go to church on Sunday,” the Christian Legal Centre said in a statement.

Although Johnson is facing growing rebellion in his own Conservative Party, opposition Labour Party Leader Keir Starmer has promised to provide the necessary votes.

The church leaders said the measure is in breach of the European Convention on Human Rights (ECHR) (pdf), and various UK laws.

“The enforced ‘lockdown’ of churches, backed by a threat of criminal sanction, is in breach of Article 9 ECHR (in particular, without limitation, the principle of ‘church autonomy’ protected by Article 9),” a pre-action letter from the church leaders’ solicitor reads (pdf).

“Any secondary legislation imposing such ‘lockdown’ would be ultra vires [beyond the powers of] the enabling primary legislation, read in context of the constitutional liberties of the Church enshrined in c. 1 of Magna Carta 1297, Church of England Assembly (Powers) Act 1919, Article 37 of Articles of Religion 1562, and in the common law,” the solicitor added.

According to the letter, the leaders had challenged church closures during the government’s first national lockdown imposed in March, and had withdrawn their claim in July after the government reassured them that “with effect from 4 July 2020, there is no legal restriction in respect of opening of places of worship, including churches.”

The letter said the church leaders fully acknowledge the seriousness of the CCP virus pandemic and the “need for drastic precautions,” but argues that the only legal way to do it is for the churches to introduce measures according to government advice, rather than “binding prohibition” imposed by the government.

Churches ‘Can’t Be Relegated To a Social Service’: Pastor

“Never in our history have our churches closed—not during wars, plagues or famines. Instead, we have been places of respite and hope,” Pastor Ade Omooba MBE, who led the previous legal challenge, said in a statement.

“The government seems not to understand the very important and long held constitutional position of the independence of church and civil government.”

Omooba said that, although churches provide many essential services, they “can’t be relegated to a social service.” The “motivation and key” of the services, he said, is their “love for Jesus Christ” and care for “the whole person, body, mind, and soul.”

He urged the government to “recognise the vital importance of church ministry and the principle of church autonomy from the state.”

The Epoch Times did not immediately get a response to a request for comment from the Department of Health.