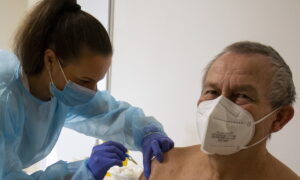 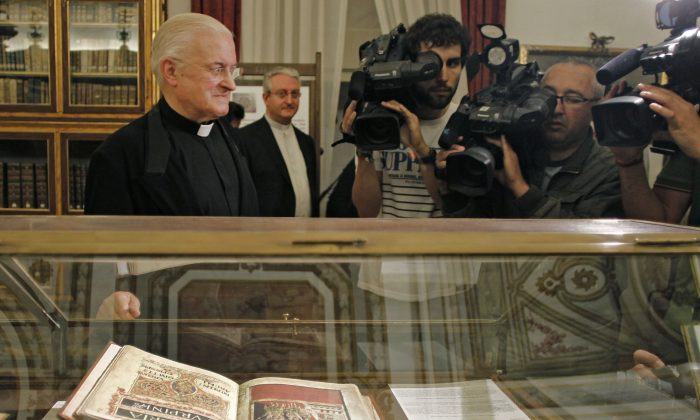 Jose Maria Diaz (R), the Dean of the Cathedral of Santiago de Compostela, poses by a replica of the 12th century religious Calixtinus Codex manuscript on display in the cathedral on July 7, 2011. A former electrician for Spain’s famed cathedral in Santiago de Compostela is on trial for his alleged theft of the priceless 12th-century Codex Calixtinus religious manuscript. It is considered the first guide for Christians making the ancient pilgrimage across northern Spain called the Camino de Santiago. Jose Manuel Fernandez Castineiras appeared in court Monday Jan. 19, 2015 with his wife and son after authorities found the Codex in his garage in 2011 and recovered 1.2 million euros ($1.4 million). (AP Photo)
Europe

MADRID—The former electrician for Spain’s famed cathedral in Santiago de Compostela denied Tuesday having ever seen the priceless 12th-century Codex Calixtinus that authorities found in his garage and insisted he doesn’t remember confessing that he stole it.

The richly-decorated Codex, which went missing in 2011, is considered the first guide for Christians making the pilgrimage to venerate St. James.

Jose Manuel Fernandez Castineiras, who is in his 60s, made the declarations a day after his lawyer argued that the confession should be thrown out. The lawyer, Carmen Ventoso, also said judges should throw out the security video that appeared to show her client in a cathedral office stuffing money into his pockets.

Authorities who searched the electrician’s home in 2012 also found other valuable religious works and recovered more than 1 million euros ($1.2 million).

Fernandez Castineiras faces up to 15 years in prison if convicted.

His wife, Remedios Nieto, testified Tuesday that she never saw the money in her home and wasn’t surprised when her husband bought property because she said he worked hard and was a dedicated saver.

She also said her husband would not allow family members to enter a workspace he used because he said he didn’t want paperwork there disturbed.

The popular pilgrimage depicted in the Codex across northern Spain to the cathedral in the northwestern Galicia region was inspired by the reputed discovery of the apostle’s tomb around the year 800.

Tens of thousands do at least part of the various pilgrimage routes to Santiago de Compostela each year, hiking across Spain, France, Switzerland, Germany and other European countries.