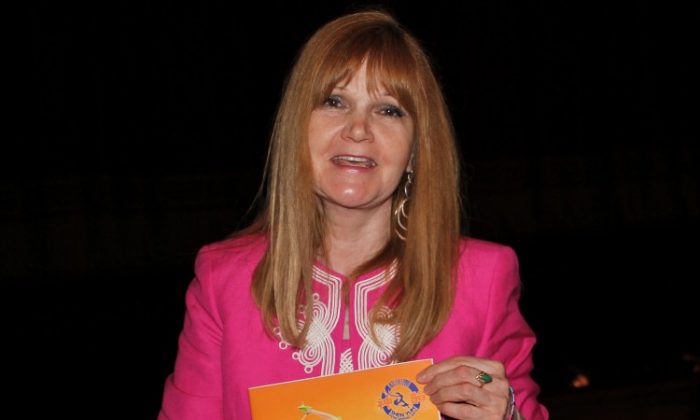 CHICAGO—Andrea Valinevicius is a cantor in her church, so she has a sense of hallowed music when she hears it. That was part of her experience when she saw Shen Yun Performing Arts at the Civic Opera House in Chicago, April 19.

“The music was absolutely amazing, very uplifting,” she said, exploring for words. “It’s beautiful, and very serene. It has a calming sense to it and yet a life and a joy to it.”

Ms. Valinevicius said she would have bought the CD of the music if it was available, and if they had a DVD she would have got that too, “just so I could watch this over and over again,” she said.

She settled for a poster of Shen Yun, and said if she could have afforded it she would have bought tickets for her sister’s family as well.

“An extraordinary experience, something that they should see,” she said.

Ms. Valinevicius commented on the colors in Shen Yun, which appear in the handmade costumes and further complemented by the digital backdrops. They were “uplifting, a kaleidoscope of colors,” she said, adding, “Colors you wouldn’t imagine that work together, worked so beautifully together like all the flowers of nature.”

“Audiences travel from the Himalayas to tropical lake-filled regions; from the legends of the culture’s creation over 5,000 years ago through to the story of Falun Dafa in China today; from the highest heavens down to the dusty plateaus of the Middle Kingdom,” the Shen Yun website says.

Ms. Valinevicius described Shen Yun’s performance as “very rich and very beautiful.” She was saddened to learn about the persecution of Falun Dafa practitioners in China, scenes of which were depicted through a number of contemporary pieces in the performance.

“I am sad to hear about the communist occupation there and that they are suppressing people from expressing their beauty, because life is poetry itself and this is what I saw tonight, the beautiful sight of the culture,” she said.

Shen Yun had been a “combination of all the arts, the poetry, the paintings, the dance, the movements, everything,” she said. “I can’t think of words to describe how beautiful this experience was.”