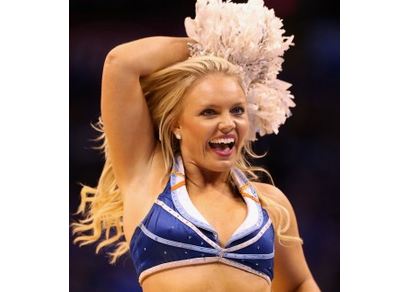 A cheerleader who was described as “too chunky” by a CBS blogger responded, saying “Shame on you.”

Kelsey Williams, the Oklahoma City Thunder cheerleader (NBA) told ABC that the CBS blogger, Claire Crawford, is a women so she knows “exactly what we all go through on a daily basis just being a woman.”

“Shame on you,” Williams repeated.

Crawford described Williams as “too chunky” in a post after a Thunder win in late April.

“The Rockets looked terrible in Game 1, but some say they weren’t the only bad-looking people on the court,” Crawford wrote. She noted that Thunder fans had supposedly criticized Williams for having “pudginess around her waistline.”

Crawford did write that “we think she’s beautiful” and called Williams a “pretty blonde,” but her post drew criticism, especially with the inclusion of a poll that asked readers if “this chick is ‘too chunky’ to be a cheerleader.”

The Houston Chronicle reported that the name Claire Crawford may be a pseudonym for another staff member at CBS.

Responding through a tweet soon after the incident, and referring to the outpouring of support, Williams said: “We wouldn’t know what blessings were if we didn’t go through trials. Thank you to EVERYONE for the compassion and love today. I’m in awe.”

Williams told ABC that she works out three to four hours to meet the requirements to be a cheerleader, but that she’s comfortable with her body. “I have always had more of an athletic build, different than the slender ballerina that some people may think of as a dancer, and that’s just not me,” she said.

Her family was hurt by the incident, Williams said, and Williams started crying during the interview when she recounted her husband’s and father’s reactions. “They are just equally upset,” she said. “They think I am beautiful and they love me, so I think they were hurt too.”

Williams said that she was “just going to keep my chin up.”