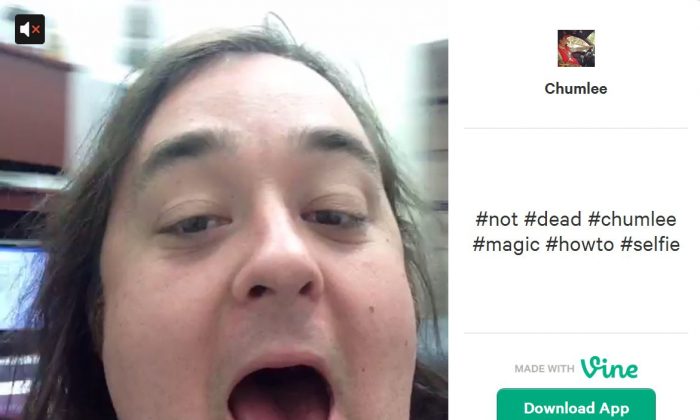 Origins of a Celebrity Death Hoax

Austin “Chumlee” Russell was the latest celebrity featured in a death hoax, with the “Pawn Stars” mainstay releasing a Vine video saying he’s “not dead” repeatedly.

The death hoax was first published by a known hoaxing website called the Internet Chronicle, which also includes nuggets such as “Kim Jong-Un cancels nuclear war, reveals he is K-pop star PSY” and others.

The Chronicle claimed that Russell smoked a huge amount of marijuana and “overdose[d],” and quite a few people posted their condolences about Russell’s apparent passing. The website has also spread rumors in April that troubled actress Amanda Bynes also died, and earlier claimed Syrian President Bashar al-Assad was assassinated. Assad has recently given interviews about the Syrian civil war.

While a number of the hoaxes spread via Twitter and Facebook, many of the fake death hoaxes, as the New York Times pointed out, were created by the Global Associated News, which sounds like an official website, but it often spreads false information, including death rumors.

The website even has a disclaimer at the bottom which reads: “FAKE… THIS STORY IS 100% FAKE! this is an entertainment website, and this is a totally fake article based on zero truth and is a complete work of fiction for entertainment purposes!”

But people still get misled by it.

Mark Bell, an adjunct professor at Indiana University-Purdue University Indianapolis, explained to the the New York Times one of the reasons why death hoaxes spread is because “people like to lie.”

“They get a thrill from it. There is a little hit of dopamine when you lie, especially a lie that is believed by somebody else,” he added.

The purveyor of the Global Associated News, Rich Hoover, told the newspaper that he generates ad revenue when one of these rumors spread.

“I’d be lying if I said there wasn’t some twisted sense of satisfaction or accomplishment,” he said.

Over the years, there have been hundreds of celebrity death hoaxes, but here are some of the more notable ones:

Comedian Bill Cosby has been at the center of a number of death hoaxes in recent years, prompting him to respond in person–usually angrily–several times.

“Emotional friends have called about this misinformation,” Cosby said via Twitter in response to the death hoax, according to the website. “To the people behind the foolishness, I’m not sure you see how upsetting this is.”

Two years earlier, there was another Cosby death Internet rumor spread via Twitter. He was forced to go on “Larry King Live” to explain  he is still in the land of the living.

“I don’t want [whoever spread the rumor] to do this anymore, because this is my fourth time being reported [dead],” he said, adding: “Maybe a psychiatrist will say I’m feeding [the rumor starter’s] ego, but I just want to say to friends of that person: Just tell him to stop, because it isn’t funny,” according to CNN.

Like Cosby, comedian Eddie Murphy is possibly the most “killed off” celebrity around.

A report “report” late last year claimed he died in a “snowboarding accident” in Switzerland from none other than the Global Associated News.

The rumor has spread for months. Just last week, it was posted on the Drudge Report forum.

But just months before, a “R.I.P. Eddie Murphy” Facebook page was created, according the Mediamass website. The page merely said that “our beloved actor Eddie Murphy passed away.” The page generated more than 1 million “likes” on Facebook.

“He joins the long list of celebrities who have been victimized by this hoax. He’s still alive and well, stop believing what you see on the Internet,” representatives for the actor said last year in response to the death hoax.

As The Sun pointed out, Justin Bieber “has been the victim of more death hoaxes than the amount of albums he has released.”

In March, rumors about Bieber spread across the Internet saying the 19-year-old pop singer died. The Global Associated News was responsible, saying he “died in a single vehicle crash on Route 80 between Morristown and Roswell.”

In 2011, a larger death hoax about Bieber spread across Twitter, when #RIPJustinBieber trended on the social media site. Literally millions of people thought that he was dead, according to the Sun.

Martial artist Jackie Chan has also been the victim of several death hoaxes, with several “R.I.P. Jackie Chan” Facebook pages popping up. One appears to be a spam page that seeks “URGENT HIRING!” for workers in the Philippines. But there’s also one that says “Jackie Chan is not Dead he’s alive.”

In 2011, a Jackie Chan “R.I.P” page spread quickly and generated more than 67,000 “likes” at one point. The rumor claimed he suffered a heart attack and died, according to the Washington Post.

News.com.au said that the 2011 prank originated on a page that was created to look similar to the Yahoo!7News website.

After the rumor spread, Tatum had to reply on Twitter, saying “On set in Montreal. Alive and well. :-).”

Singer Cher was the subject of a death hoax inadvertently spread by reality TV star Kim Kardashian in 2012.

Apparently tricked by the rumors, Kardashian tweeted “Did I just hear that Cher has passed away? Is this real? OMG” to her more than 12 million followers at the time.

Kardashian later apologized and called on those spreading the rumors to “get a life.”

This time, the rumor did not originate from Global Associated News, but from Twitter and Facebook accounts.