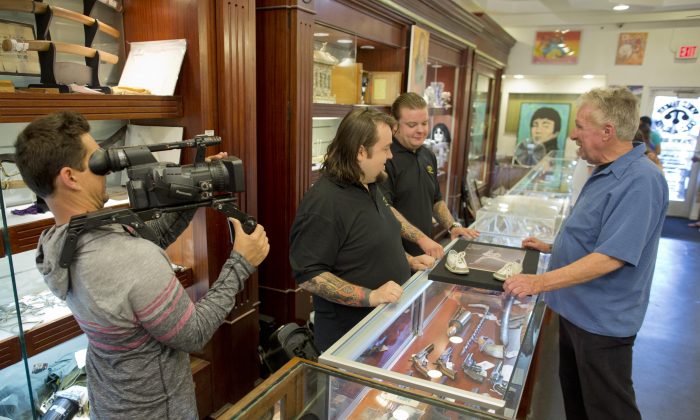 Chumlee–or Austin Russell, the star of “Pawn Stars,” has not died, but a viral rumor is saying otherwise. Many tweeted “RIP Chumlee” on Wednesday, but it’s not true.

On Wednesday, Russell went on Twitter to dispel the rumor. “May we live long, Rich forever,” he wrote.

The rumor that’s being circulated online is asking: “Did Chumlee Russell from Pawn Stars die recently? There was one article stating that he passed away from a heart attack, but not sure!”

It’s apparently referring to an article that was published on eBuzzd, a fake news website, which says he died.

“Austin Russell, also known as Chumlee, star of History’s reality series ‘Pawn Stars,’ has died from an apparent heart attack, sources confirm to eBuzzd. He was only 31 years old,” the fake article reads. “The news comes as a shock considering Chumlee’s [sic] had just recently altered his lifestyle habits, and lost 75 pounds in a year by exercising at a gym six days a week and improving his diet, including drinking more juice, eating more vegetables and abstaining from red meat, a change that was inspired by his father’s death at age 54 from pancreatic cancer, two weeks before Pawn Stars debuted.”

And last year, another hoax claimed that Russell died of a “marijuana overdose,” which was from a fake news website.

“The rumor was nothing more than a hoax, a bit of fiction promulgated in a 14 May 2013 article published on the Internet Chronicle web site, one which followed up that site’s equally fictitious report from two months earlier which claimed Chumlee had been arrested for possession of seven pounds of marijuana. (The putative cause of death given in Chumlee’s phony Internet Chronicle obituary, a ‘marijuana overdose,’ is virtually a medical impossibility),” hoax-debunking website Snopes said.

However, on Twitter and Facebook on Wednesday, a large number of users were retweeing the eBuzzd report and saying “RIP Chumlee.”

“Wow, can’t believe that Chumlee is dead! He was doing so well changing to a healthy lifestyle but guess he took it to far to fast,” tweeted another user.

Regarding his weight loss, Russell recently said he lost about 75 pounds.

According to ABC News in January, the 31-year-old said, “I’m going to the gym six days a week. I’m eating right. Well-balanced diet. I drink a juice smoothie every morning.”

“My dad died from pancreatic cancer at 54 … I’m making sure I’m eating my vegetables and staying away from the red meat,” he added.