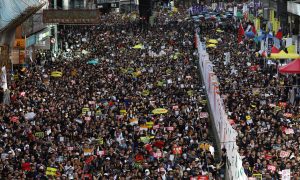 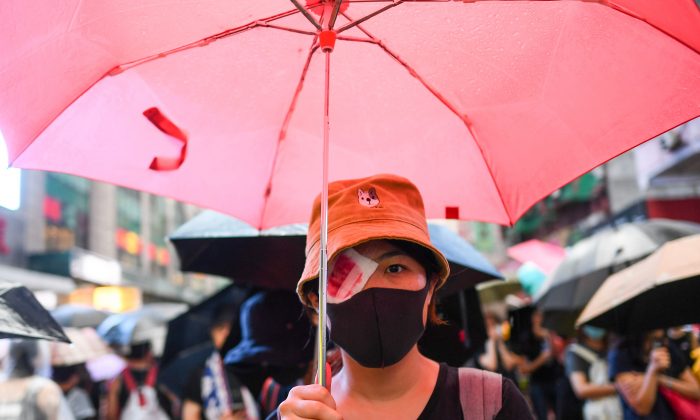 A protester wearing an eye patch, after a woman suffered an eye injury which demonstrators blamed on a bean-bag round fired by police, walks along a street during a rally in Hong Kong on Aug. 18, 2019. (Manan Vatsyayana/AFP/Getty Images)
Canada

Freeland made the remarks in a joint statement issued Saturday with her counterpart in the European Union, Federica Mogherini, urging restraint amid “a rising number of unacceptable violent incidents.”

“It is crucial that restraint be exercised, violence rejected and urgent steps taken to de-escalate the situation,” the pair wrote, not explicitly assigning blame to either the government or the protestors.

“Engagement in a process of broad-based and inclusive dialogue, involving all key stakeholders, is essential,” the statement said, noting that both Canada and the EU support Hong Kong’s “high degree of autonomy” within China, as well as its residents’ right to peaceful assembly.

Read the Joint Statement by Canada and the European Union on the situation in #HongKong: https://t.co/79gmIMDc2a

That statement prompted the spokesperson for the Chinese Embassy in Canada to fire back, calling for Freeland to “immediately stop meddling in Hong Kong affairs and China’s internal affairs.”

“The Canadian side should be cautious on its words and deeds,” when it comes to Hong Kong, the spokesperson wrote.

They noted that the “one country, two systems” priciple—the framework the city has operated under since the former British colony was passed to China in 1997—is a national policy, not international law, and suggested it wasn’t Freeland’s place to comment.

The embassy also defended the actions of Hong Kong police, saying the protests “deteriorated and evolved into extreme violence.”

There have been months of protests in the semi-autonomous region as some residents accuse the Communist Party-ruled Chinese government of chipping away at Hong Kong’s democratic rights.

And while the protest movement has been marked by violent clashes with police, Sunday’s march was peaceful, with no reports of violence.

The movement’s demands include the resignation of Hong Kong leader Carrie Lam, democratic elections, and an independent investigation into police use of force.