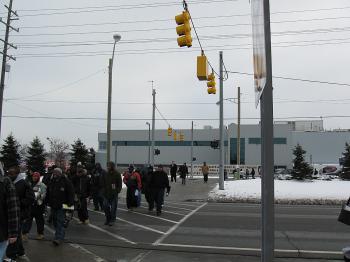 Chrysler Shuts Down Plants for Holidays

By Jeanmarie Lunsford
biggersmaller
Print
DETROIT—As southeast Michigan hunkers down for the first major snow storm of the winter, Chrysler workers are preparing to be hit with yet another economic storm.

On Thursday morning grim-faced Chrysler workers streamed out of Chrysler’s Warren Stamping and Truck Assembly Plant. For some, Friday would be their last day until well after the New Year.

On Wednesday evening, Chrysler announced that it would shut all 30 of its manufacturing facilities for one month, idling 46,000 workers. General Motors said it was delaying a key supply plant for the Chevrolet Volt, as both attempted to avoid imminent collapse while the Bush administration ponders a rescue.

Clutching pink and white announcement papers, few of the Chrysler employees wished to comment as they crossed the street, hurrying to their cars.

One worker candidly said, "This sucks, I just want to work, you know, it's the holidays and I've got a family to feed." Another added, "Oh, they're always doing this to us, it's always something!"

One man pointed to the Mound Rd. Plant across the street and yelled out, "Hey! Notice how my backside is pointed at the plant? Well, that's what I think. I think that says it."

Chrysler said Wednesday that it would double a planned shutdown of all 30 North American plants from nearly two weeks to one month—effective Friday Dec. 19 through Jan. 19—citing sluggish sales. Chrysler said a lack of consumer credit had kept even willing buyers from closing on sales over the past couple of months.

"It comes as no surprise to me," said Eddie Gordish, a skilled trades worker at Jefferson North Assembly in Detroit. "All of a sudden, everything seems so crazy, so dire."

"I'm concerned," said Daniel Mastin, a local restaurateur. "The government was in a real hurry to bail out Wall Street, but they're dragging their heels when it comes to Michigan. This is really going to impact our businesses here, and I'm afraid that it's only going to get worse before it gets better."

Chrysler's move signals the first of a cascade of dire actions that will result if the automakers don't receive government aid. Following a 47 percent decline in sales last month, some Chrysler plants will be closed until February.

"Manufacturing makes up the backbone of this economy, and that backbone is being broken," said Sen. Debbie Stabenow (D-Mich.) in a statement earlier this week. "This administration must act now to preserve the middle class and protect our economy."

Chrysler's plants typically are shut down from Christmas Eve through New Year's Day. Workers are to be considered laid off for the additional two to four weeks that their plants are shut down.

Chrysler and GM have said they need at least $8 billion by the end of the month to avoid bankruptcy and at least $14 billion to get through the first quarter.

"It's clear that the automakers are in a very fragile financial condition, and they're taking steps to deal with it," said White House spokeswoman Dana Perino. "We're aware of their financial situation and are considering possible policy options to provide assistance in an appropriate way. As we've said, a disorderly collapse of the auto industry should be avoided."

While President George W. Bush and other officials have promised to act since the Senate blocked a rescue last Thursday, auto dealers and other industry supporters say the wait is damaging the rest of the economy.

"Time is of the essence," said Annette Sykora, chairwoman of the National Automobile Dealers Association. "A lot of people are depending on the White House to provide the bridge loans to prevent a collapse of the auto industry. We need action now."

"These delays due to a cash crunch make it clear that without federal investment, the green revolution could come to a screeching halt," said U.S. Rep. John Dingell (D-Mich). "The sooner we get this bridge loan to Detroit, the better chance we have of getting more green cars into showrooms quickly."