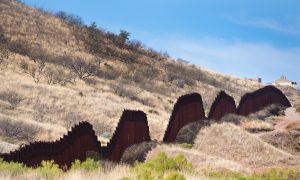 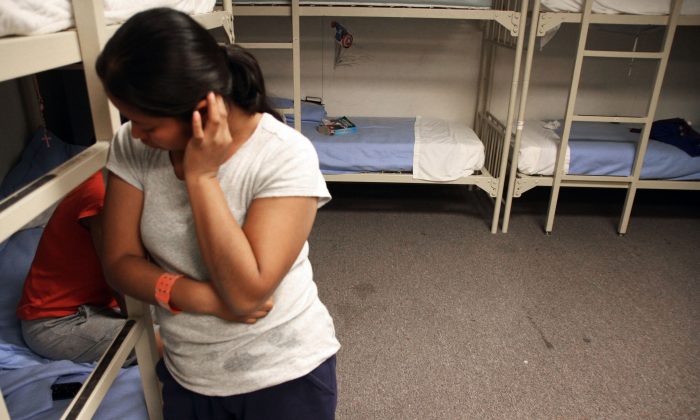 A Guatemalan woman in a federal detention facility for illegal immigrant mothers and children in Artesia, N.M., on Sept. 10, 2014. (AP Photo/Juan Carlos Llorca)
US

The recent spotlight on immigration enforcement has failed to address the biggest bottleneck in the system—immigration judges.

Right now, there are 300 immigration judges around the country. And they have a daunting 542,411 cases pending. At full speed, judges can complete about 200,000 cases a year, as well as about 65,000 bond hearings and motions. But it’s also likely another 285,000 cases will spring up on the docket in the meantime.

The last year the courts were able to decrease their backlog was 2006, according to data cruncher Transactional Records Access Clearinghouse (TRAC) at Syracuse University.

However, the 50 judges will be plucked from existing courtrooms, rather than being added.

“We are understaffed by 73 judges already,” said Dana Leigh Marks, president of the National Association of Immigration Judges (NAIJ). If judges are moved from their home docket and sent to detention centers, “we fear that the mistakes of the past administration are going to be repeated,” she said.

Marks said that in 2014, when then-President Barack Obama shifted the immigration courts’ focus to cases involving recent arrivals, the courts were essentially less productive. She was obliged to say none of her remarks can represent the position of the Justice Department.

The focus on new arrivals under Obama was meant to deter illegal border crossing and remove illegal immigrants before they became integrated into U.S. communities, according to the Migration Policy Institute, a Washington-based think tank.

But the new arrivals’ cases were nowhere near ready to be ruled on—it can take a year or more for a defense lawyer to prepare a case, Marks said.

“Those cases weren’t ripe for hearing, but it had the consequence of pushing to the back of the line many cases of individuals whose cases were ripe and ready for hearing. And yet their cases got pushed back two, three, sometimes even four years,” she said.

On average, it currently takes around 590 days for a case to be completed, according to TRAC.

But the time it takes for a case to be determined varies depending on whether the individual is in a detention facility or not. For example, in Seattle, a case of a non-detained person takes an average of 645 days to complete, whereas a  detained person at Tacoma takes 138 on average, according to TRAC.

In Louisiana, the disparity is even greater, with non-detained individuals in New Orleans taking an average of 679 days for case completion, compared with 86 days for those detained at the Oakdale facility.

Funding to immigration courts falls far behind the amount that is allocated to Customs and Border Protection (CPB) and Immigration and Customs Enforcement (ICE).

Between fiscal 2002 and fiscal 2013, the budgets for CPB and ICE were boosted by 300 percent, whereas funding for immigration courts rose 70 percent, according to a Migration Policy Institute report.

“As a result, judicial removals are a significant choke point in the deportation system,” the report states.

Sarah Pierce, associate policy analyst with the Migration Policy Institute, said the funding disparity could be a matter of optics.

“I think there’s something more visually appealing for the government to fund border security as opposed to immigration courts,” she said. “Funding more immigration judges is never going to get headlines.”

What Immigration Judges Do

When the Department of Homeland Security (DHS) charges an alien for a violation of immigration law—anything from overstaying a visa, to having a student visa but not going to school, or working while on a visitor visa—the case gets handed to the Executive Office for Immigration Review. EOIR, which falls under the Department of Justice, has oversight over the immigration courts nationwide and the Board of Immigration Appeals.

“I frequently say that we do death penalty cases in a traffic court setting,” Marks said. “When somebody is afraid that they are going home to face persecution or perhaps even death, it obviously is an extremely high stakes hearing for them, but it weighs heavily on the person who is called upon to make that decision.

“Yet we are making these decisions at a volume, and with the kinds of evidence, that’s much more similar to a traffic court.”

Marks said 95 percent of an immigration judge’s time is spent ascertaining whether someone is eligible for some kind of remedy or relief.

“Have they been here for so long (even though they’ve been here illegally) that they qualify for cancellation of their removal—which is a form of relief that says if you’ve been here for more than 10 years and you are a person of good moral character, and you can show that your removal would cause exceptional or extremely unusual hardship to a qualifying relative, [you could] qualify for that benefit.”

Not having an attorney is also a huge factor in whether the individual turns up at court for the hearing, Marks said. “There’s a much higher rate of appearance when somebody has an attorney.”

About 30 percent of detained individuals—if they’re not deemed dangerous or a flight risk—are granted bond by immigration judges and released on the condition they turn up for their hearing. The bond is refunded once the case is complete.

“The point of the bond is to provide incentive to appear,” Marks said.

In fiscal 2015, the median bond amount was $6,500 and 86 percent of those on bond showed up for court, according to TRAC numbers.

If an individual doesn’t show at a court appearance, they are automatically ordered removed and the case is handed back to ICE.

Additionally, 89 percent of the immigration cases in the last fiscal year were completed with a foreign language interpreter.

Expanding the scope for “expedited removals” would be one way to slow the flood of cases on immigration court dockets. However, the practice brings its own potential issues.

Expedited removal cases do not go in front of an immigration judge. The DHS officer who is authorized to issue an order of expedited removal operates as prosecutor and judge and often arrests an individual and orders him or her deported on the same day, according to the National Immigration Project. With limited exceptions, individuals subject to expedited removal have no right to an appeal.

Individuals who fall into the expedited removal category include those who have received a prior removal notice, and anyone who is apprehended within 100 miles of the border and who has been in the country less than 14 days.

The president has the authority to broadly widen the scope of expedited removals to anywhere in the United States and anyone who has been in the country less than two years.

“It’s a very simple way the Trump administration could ramp up removals—just by expanding the use of expedited removals,” said Pierce.

It is unclear if or when expedited removals will expand, but DHS Secretary John Kelly has said he will publish a notice in the Federal Register once a decision is made.