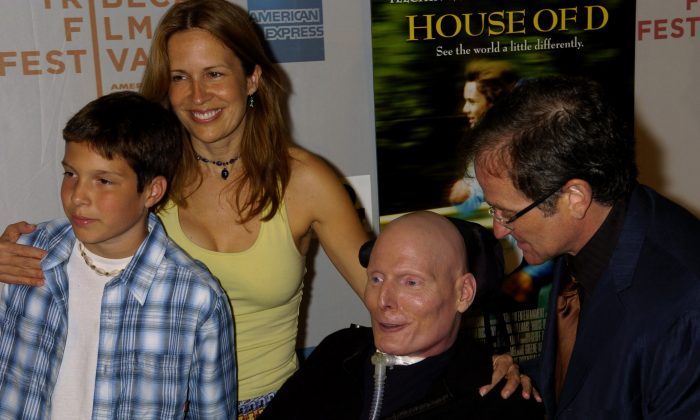 Actor Christopher Reeves arrives with wife Dana, and son Will with actor and director Robin Williams, right, for the world premiere of the movie " House of D" in which Robin stars at the 3rd Annual Tribeca Film Festival, Friday, May 7, 2004, in New York. (AP Photo/Louis Lanzano)
US

Christopher Reeve and Robin Williams were close friends leading up to Reeve’s death in October 2004.

The pair were both accepted into the exclusive Advanced Program at the Julliard School in Manhattan–in fact, they were the only two to be accepted in 1973.

Reeve said in his autobiography, Still Me, that he and Williams had several classes in which they were the only students–in fact, Williams was the first student he met at the university, and he spent their first moments watching Williams “in awe as he virtually caromed off the walls of the classrooms and hallways.”

Reeve was injured in a horse riding accident in 1995 that left him paralyzed from the waist down. He was quickly transported to a local hospital then flown to the University of Virginia Medical Center.

Robin Williams, left, and Christopher Reeve, attempt to hail a taxicab in New York City on Feb. 9, 1981. Williams went to see Reeve, who is appearing in the play “The Fifth of July”, backstage after his performance Friday night. (AP Photo/Steve Sands)

Actor Robin Williams, right, looks up at his friend and colleague Christopher Reeve as they pose for photographers at an American Paralysis Association dinner in New York Tuesday, Nov. 17, 1998. (AP Photo/Lynsey Addario)

Reeve recounted how he struggled in the first few days after the accident, and contemplated suicide, though his wife convinced him against it.

“As the day of the operation drew closer, it became more and more painful and frightening to contemplate. In spite of efforts to protect me from the truth, I already knew that I had only a fifty-fifty chance of surviving the surgery,” Reeve wrote.

“I lay on my back, frozen, unable to avoid thinking the darkest thoughts. Then, at an especially bleak moment, the door flew open and in hurried a squat fellow with a blue scrub hat and a yellow surgical gown and glasses, speaking in a Russian accent. He announced that he was my proctologist and that he had to examine me immediately.

“My first reaction was that either I was on way too many drugs or I was in fact brain damaged. But it was robin Williams. He and his wife Marsha had materialized from who knows where. And for the first time since the accident, I laughed. My old friend had helped me know that somehow I was going to be okay.”