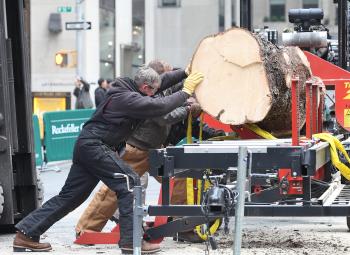 Christmas Trees Get Mulched for a Greater Good

At the park, high school volunteers helped shovel mulch into wheelbarrows and drop it around the bases of the park’s trees as fertilizer. Sights like this could be seen across the city this weekend in what has come to be known as Mulchfest.

A joint effort by the city’s Department of Parks and Recreation, the Department of Sanitation, and GreeNYC, Mulchfest has become an annual tradition, now in its 15th year.

Over the course of two days, residents across the five boroughs were encouraged to drop off their old Christmas trees, devoid of any ornaments or tinsel, to any of the more than 70 locations, so they could be “tree-cycled” into mulch, which will be later used as nourishment for city gardens and trees.

Debbie Hulse, a gardener at Tompkins Square Park, says some residents take the mulch back home with them to spread around the bases of neighborhood trees. “It gets the community connected,” says Hulse, who notes the neighborhood has many community gardens.

According to the parks department, almost 24,000 Christmas trees were mulched last year. They are hoping to have an even better turnout this year.

Mulch helps to conserve warmth and soil moisture during the winter and prevents weed growth throughout various horticultural areas, according to Million Trees NYC.

Mulchers should beware of salt, however. Mulch mixed in with salt from the ground can be damaging to trees.

Andre Chow, a student from Stuyvesant High School, came to volunteer on Sunday, helping to fertilize the ground throughout the park. Chow was careful to ensure that no salt got mixed in.

It’s Chow’s first time helping out. He says he enjoys working in the park. “It’s a nice feeling," said Chow.

The event provides opportunities for young people like Chow to get involved with the recycling program. Million Trees NYC encourages youth to volunteer at various parks throughout the city. They in turn help educate the public about the benefits of mulching.

Victor M. Rendon works for AmeriCorps as part of the New York Restoration Project (NYRP), an organization founded by actress Bette Midler to create a cleaner and greener city. Rendon says the volunteer program for kids helps them develop many job skills.

The Department of Sanitation will collect trees until Jan. 15 and asks residents to put their Christmas trees curbside as soon as possible. They also ask residents not to put the trees in plastic bags.

Perhaps one of the largest Christmas trees to be mulched, the Rockefeller Center Christmas Tree, will, for the fourth year, be donated to Habitat for Humanity in order to build a home for a family in need.

This year, the 75-year-old, 74-foot Christmas tree’s lumber will go to a local chapter in Newburgh, N.Y., in the mid-Hudson Valley, not far from where the tree came from.

The tree was donated by Rockefeller Center owner Tishman Speyer. According to a statement from Habitat for Humanity, the tree’s lumber will be used for framing the exterior walls of the home.

“This lumber is so valuable because it will help a hard-working family in need of decent housing to own their own home,” said Marci Gurton, director of Development for Habitat for Humanity of Greater Newburgh, in a statement.

Last year, the 2009 tree went to build a home for Iveth Bowie, her daughter, and grandson in Stamford, Conn. The 2008 tree went to Brooklyn to build a multifamily condominium complex.