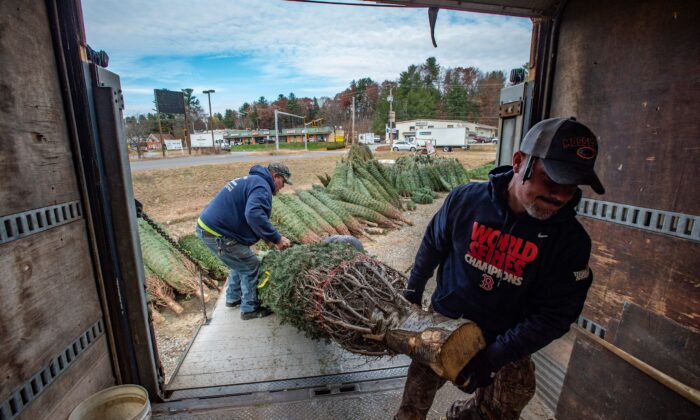 A tree is loaded into a box truck as part of a large tree order at North Pole Xmass Trees in Nashua, N.H., on Nov. 21, 2021. (JOSEPH PREZIOSO/AFP via Getty Images)
US News

Most people prefer to buy their Christmas tree early, while some wait till the last minute.

Whether real Douglas fir or faux balsam, “O Tannenbaum” has always been in abundant supply come holiday season. This year may be different.

“It’s been really tough. It’s a tough year for all consumer goods. Everything is more expensive,” Warner told The Epoch Times.

Many of the artificial trees bound for retail store shelves are currently stuck on cargo ships parked off the California coastline, creating a “log jam” of products, Warner said.

“However, that doesn’t mean they’re not coming in,” she said of the artificial trees made overseas.

Warner said about 70 percent of artificial trees normally arrive by late November. As of last week, the number of store-bound trees was about 45 percent.

“The number changes every day. There are some supplies available online. There’s a tree for everyone, and Christmas has not been canceled,” she said. “Consumers just have to be a little patient.”

Bill Boltz, Lowe’s executive vice president of merchandising, said early sales of holiday tinsel and other trimmings are tracking ahead as consumers are getting a jump-start on their holiday decorating.

“With broader awareness of potential global supply chain disruptions, we are seeing many consumers looking to purchase products as soon as they are available in our stores,” Boltz said in Lowe’s third-quarter earnings report for 2021.

“In addition, Lowe’s is offering the largest selection of artificial trees ever, with more than 4,000 options available on Lowes.com. We leverage our scale and carrier relationships to secure more capacity and work to minimize cost increases, and we also ordered inventory earlier than in years past, including our seasonal buys.”

Doug Hundley, seasonal spokesman for the National Christmas Tree Association (NCTA), which represents the live tree industry, said that in spite of the rain, floods, and heat waves this year, there’s no shortage of real trees at the moment.

What’s changed, he said, is that there’s no longer an oversupply of real trees, as in years past.

“We have a good balance, but a somewhat tight market,” Hundley told The Epoch Times. “People got used to seeing lots of trees in the lots right up to Christmas Day. They’re not doing that anymore. Right now, the reason the market is tight is we haven’t planted enough.”

According to the NCTA, there are close to 350 million real Christmas trees currently in production on 15,000 farms in the U.S. alone. About 25 million to 30 million trees are sold every year.

For every real tree harvested, one to three seedlings are planted the following spring.

Hundley said it can take as many as eight to 10 years to grow a Christmas tree to a typical height of 6 or 7 feet. Around two-thirds of all farm-grown trees are shipped within a geographical range of 50 to 500 miles. The remaining trees are sold on-site, he said.

“The industry has always shipped trees on local trucking companies,” he said.

However, with tighter supplies come higher costs to produce and transport the harvested trees—costs that are ultimately passed on to customers, Hundley said.

About 80 percent of artificial trees are made in China, according to the U.S. Commerce Department.

Warner said consumers can expect to see a 20 percent hike this year in the cost of artificial trees. Her advice was to buy “as early as possible,” and buy online.

“If you don’t see what you want, wait a few days” for new shipments to arrive, she said.

Bill Tolmachoff, owner of Tolmachoff Farms in Glendale, Arizona, said this year has been a challenge for Christmas tree growers, even though he doesn’t grow the trees himself.

The farm gets all of its supply from an Oregon tree farm, which suffered a severe loss during an ice storm, he said.

“The ice storm broke a lot of trees. Usually, I take about 1,000 trees. This year, he’s trying to ship 800,” Tolmachoff told The Epoch Times.

He said that the cost of shipping the cut trees by truck has also gone up this year. It now costs $600 more than the $4,700 he normally pays.

“You know what? [The market impact] might be in the price this year. Every year, it’s the fuel and the trucking,” said Tolmachoff, who estimates a 20 percent increase in the average $75 cost of a real tree.