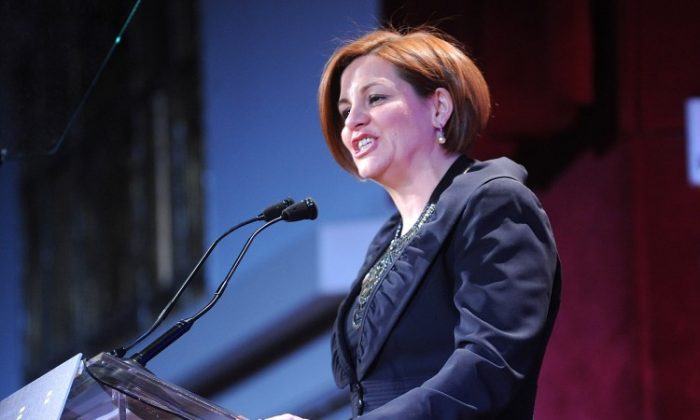 The tweet included a five-minute video, where she spoke of growing up in New York City. In the video, Quinn got emotional when speaking of the death of her mother, who died on Christmas day when Quinn was 16.

Quinn will begin campaigning with a “walk and talk” tour of all five boroughs Sunday, beginning in the far northern Manhattan neighborhood of Inwood.

Quinn will be running as a Democrat in a field that already includes Public Advocate Bill de Blasio, former Comptroller Bill Thompson, and former City Council member Sal Albanese. Current city Comptroller John Liu is expected to run, although his campaign has been under federal investigation since 2009 for questionable campaign finance practices.

If elected, Quinn would be the first female mayor of New York City.

While Quinn formally announced her candidacy on Sunday, it has been no secret the term-limited council member had her eyes on staying at City Hall. In January of 2012, almost two years before the election, Quinn reached the contribution threshold under the city’s campaign finance system by raising nearly $5 million.

As of press time, Quinn’s campaign finance records show she has $5.2 million in her coffers, including $596,039 in public matching funds. Candidates are due to file their next disclosure records by March 15.

As speaker, Quinn has received praise for helping to pass a living wage law that sets the minimum wage for workers in city-funded developments to $10 per hour, however, that bill is tied up in court after Mayor Michael Bloomberg sued to uphold his veto. She has passed seven on-time budgets, including using discretionary funds to save fire houses and teaching jobs that were slated to be cut. Quinn was responsible for writing the law that banned smoking in bars.

Quinn has received harsh criticism for refusing to bring up the paid sick leave bill, which has been in the City Council since 2010, up for a vote on the floor. The bill, sponsored by Council Member Gale Brewer, has 37 council members support, as well as multiple workers advocates groups. Quinn has said the economic climate is not right currently. When asked at a mayoral panel on Feb. 28 what metric she would use to determine when the climate would be right Quinn said, “We are evaluating that, but I can’t tell you directly.”

Quinn is also in support of the East 91st Street Marine Transfer Station, a proposed garbage facility that would be built next to Asphalt Green, a playground and community center. Residents in the area have fought for years to have it moved elsewhere.

De Blasio and Liu both recently came out against the project, despite both having voted for the station when they were city council members in 2006.