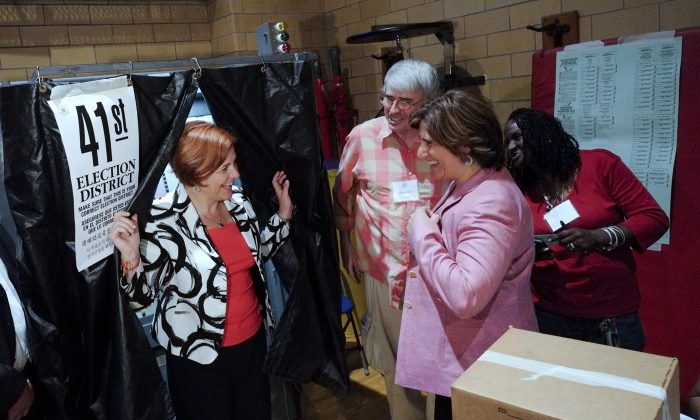 Quinn walked with her wife Kim Catullo to P.S. 33 in Chelsea with a gaggle of Quinn supporters in tow, shouting “In with Quinn!”

Despite being a hard fought campaign during the last month leading to Tuesday’s primary, the mayoral hopeful looked refresh and was beaming.

Quinn, whose name has appeared in the City Council section on the ballot for the last three elections, joked about having to find her name in a new spot.

“It is a different feeling. My eyes almost went over to the CC part of the ballot at first. It was very different but really, really thrilling,” Quinn said.

She was upbeat and confident about earning a spot in the run-off, dismissing recent polls showing her anywhere from third to tied for second with rival Bill Thompson. The top two Democrat finishers will vie in a runoff, as long as no single candidate wins greater than 40 percent of the vote.

“I always knew this was going to be a fight to the end, a fight to figure out who the top two candidates would be,” Quinn said. “I am incredibly confident, particularly given the amazing response I have been getting all over the city in the past few days—that I will be in the run-off and three weeks from now we will be right back here again and I will win the run off.”

Tim Gunn, star of Tim Gunn’s Guide to Style on Bravo, came out to support Quinn on primary day. Gunn said after seeing an African-American become president of the United States, it was time for a woman to lead New York City, a job he called the second most important.

“The issues that face the mayor and the city are constantly changing. For me it has to do with morals and character. Christine Quinn possesses the qualities we need in a mayor. She is a collaborator and a mitigator when it comes to difficulties. She is a facilitator when it comes to conflict among constituents and wanting to reach accord,” Gunn said.

He added: “I am going to be blunt. I think a lot of those qualities and characters are unique to woman. Most men don’t posses them. It is a reason why I want a woman to be running this city—and more specifically, why I want Chris Quinn to run this city.”

Quinn had no issues casting her ballot in Chelsea. Fellow Democratic candidate Anthony Weiner had issues with his signature when he voted, and Republican Joe Lhota had to cast his ballot via an affidavit due to a broken machine.