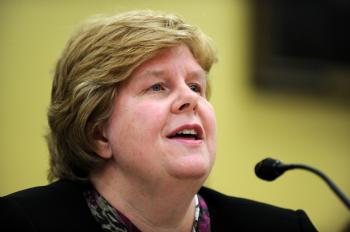 Christina Romer stepped down as chair for Council of Economic Advisers on Friday. (Tim Sloan/AFP/Getty Images)
US

Helena Zhu
View profile
Follow
biggersmaller
Print
Dr. Christina Romer announced Thursday her plans to step down as chair of the Council of Economic Advisers to resume her position as the Professor of Economics at the University of California, Berkeley, according to an announcement on Friday.

She will leave the Barack Obama administration on Sept. 3, joining her son in California, who is starting high school in the fall.

While in her position at the White House, Romer has met with the president nearly every day to help chart the administration's response to the economic recession.

“Christy Romer has provided extraordinary service to me and our country during a time of economic crisis and recovery,” the president said in a White House release. “The challenges we faced demanded more of Christy than any of her predecessors, and I greatly valued and appreciated her skill, commitment and wise counsel.

Obama said that although Romer will return to California for family, he is grateful she will continue to give her insights and advice as a member of his Economic Recovery Advisory Board.

Romer said that it has been the “honor of a lifetime” to serve the nation as it goes through such a critical period.

“While I look forward to returning to research and teaching, the opportunity to help shape economic policy these past 20 months, and to work with the other members of the economic team and my colleagues on the CEA, is one I will always cherish.”