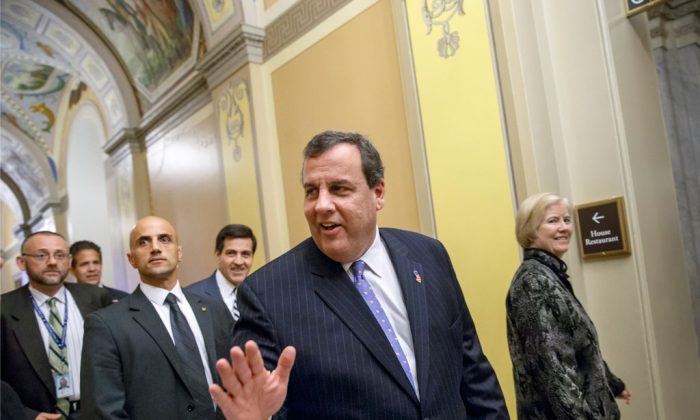 New Jersey Gov. Chris Christie leaves the Capitol in Washington on Nov. 17, 2014. Christie’s brash, say-it-like-it-is persona has made him a political celebrity. But as he relinquishes his position as chairman of the Republican Governors Association this week, Christie shifts from advocate for others to salesman for himself as a potential 2016 presidential candidate. (AP Photo/J. Scott Applewhite)
New York

DAVENPORT, Iowa—New Jersey Gov. Chris Christie’s brash, say-it-like-it-is persona has made him a political celebrity. But as he relinquishes his position as chairman of the Republican Governors Association this week, Christie shifts from advocate for others to salesman for himself as a potential 2016 presidential candidate.

Speaking for no one else, Christie will soon find out how well telling a heckler to “sit down and shut up”— as he did at a recent press event in his home state — is received in the South or the Midwest where presidential nominations are won and lost.

Some GOP consultants believe the swagger may be more damaging to Christie than New Jersey’s economic troubles— especially in the aftermath of the George Washington bridge scandal. Some Republican rivals have echoed that sentiment.

“This sort of bully demeanor may go over well in certain places, but … I grew up in the South, and we’re ‘Yes ma’am’ and ‘No sir,’ and a little bit more polite,” said Sen. Rand Paul, another possible presidential hopeful, on CBS’s “Face the Nation.”

But interviews with nearly two dozen voters from early-voting Iowa, rural Illinois, and other states suggest that, in fact, many view Christie’s tough-guy personality as his biggest asset.

“I appreciate a politician being honest,” said Jerry Eisele, 67, a self-described conservative who lives in Bushnell, Illinois. “You don’t see enough of it.”

“I don’t know if I’d want him to be president, but I got a real charge out of him telling that protester to shut up,” she said after an early-morning workout at the YMCA in Davenport.

It’s a longstanding concern even among Christie champions: that his tough, New Jersey shtick won’t translate well to early voting states like Iowa and South Carolina. As he gives up the RGA chairmanship this week, everything Christie says will reflect directly on his stock as a candidate and possible president — and could influence deep-pocketed donors looking to invest in a solid candidate.

“It is not Chris Christie’s politics or his policies that will ultimately catapult him to the nomination or sink his presidential campaign. It’s his personality,” said Hogan Gidley, a top South Carolina Republican political operative.

But Hauser sees that as a plus.

“Whether you agree with him or not,” Hauser said of Christie, “you know where he stands.”

It’s a phrase often echoed among voters, and a response his aides are banking on as they prepare to sell the concept of a President Christie.

“Everywhere I go in the country, people say, ‘When he goes there, they’re not going to like him. His personality won’t travel,'” he told The Associated Press in a recent interview. “Well, you know, why do they keep asking me to come then? People have asked me to come to every part of this country, to the Deep South, to New England, to the Midwest, to the mountain West to the Southwest. “

But GOP operatives have begun to wonder if Christie’s persona has long-term appeal.

Gidley said Republicans this cycle are looking for a candidate who can withstand a brutal campaign.

“Chris Christie’s default is to shout down political opponents. That will work for a while and it will get you recognized and it will satisfy the Republican voters’ desire for a fighter. But it will only satisfy it for so long,” he said.

Steve Schmidt, a top Republican consultant and senior adviser to John McCain’s 2008 presidential bid, predicted several of Christie’s opponents, knowing they can throw him off message with a heckler or the right question, will develop sophisticated techniques designed to provoke him into having outbursts on the trail.

“If you believe that events in the world are spiraling on the edge of being out of control, do you want someone who — whether he is or not — when you’re watching your TV screen, he can appear very hot at times and extremely thin-skinned,” he said.

Christie has repeatedly pushed back on the notion that his outbursts represent a loss of control, insisting that he uses the different facets of his personality strategically for impact. In New Jersey, he’s often cheered by audiences for berating reporters. And he’s demonstrated he can keep his cool during the most stressful times — such as his marathon press conference following the bridge scandal revelations.

Christie’s team had appeared to be working to soften the governor’s image in recent months, organizing a summit aimed at reducing the stigma associated with drug addiction and a series of intimate conversations with recovering addicts. The Sandy incident and a public showdown with a nurse quarantined against her will, appeared to undermine those efforts.

“I love him to pieces,” said Richard Goughnour, 83, a retired newspaper publisher who attended a recent rally with Christie in Burlington, Iowa. But, he allowed, Christie is “just too outspoken and too bold and too upfront for people in the Midwest,” he said.

Christie, however, doesn’t seem to mind that not everyone will love him.

“I’m not everybody’s cup of tea,” he said, “but I’m not in this business to get elected to prom king. My job is to lead, and that’s what I try to do.”

From The Associated Press. AP writer Susan Haigh contributed to this report from Windsor Locks, Connecticut.