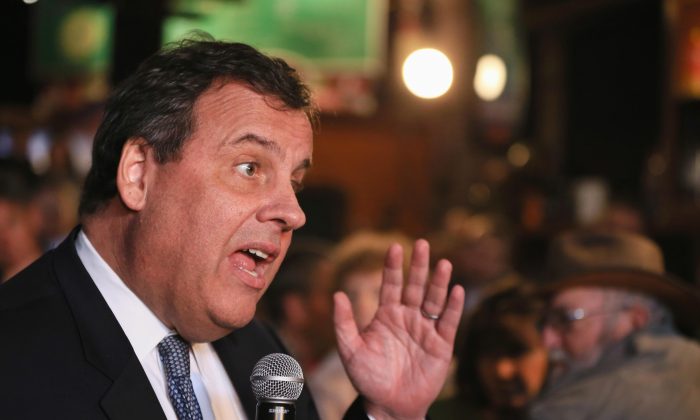 Republican presidential candidate and New Jersey Gov. Chris Christie (R-N.J.) speaks during a campaign event in Council Bluffs, Iowa, on Oct. 30, 2015. Christie just can't catch a break. In the midst of what had been shaping up to be the best week of his campaign, Christie was relegated to the "kiddie table" at the next GOP debate due to his low standing in national polls. But instead of protesting or stomping their feet, Christie and his supports are trying to brush off the latest setback and push on. (AP Photo/Nati Harnik)
Politics

NEWARK, N.J.—Chris Christie has a new slogan: No whiners here.

The Republican presidential contender is trying to put a positive spin on being relegated to the “kiddie table” at Tuesday’s night’s debate for the first time, after Fox Business Network said he didn’t have the poll numbers needed to qualify for the prime-time stage.

“We’re not whiners and moaners and complainers in the Christie campaign,” Christie said Monday on “Fox and Friends. “Give me a podium, give me a stage, put the camera on, we’ll be just fine.”

Instead of the prime-time debate, the New Jersey governor will be facing off against other low-polling candidates whose campaigns have been largely written off.

It’s the latest blow for the charismatic governor, who has struggled to emerge in a packed field led by political newcomers—notably billionaire real estate mogul Donald Trump, who has effectively stolen Christie’s tell-it-like-it-is calling card.

“Did I want to throw something at the television? Yes,” said Bobbie Kilberg, one of Christie’s most loyal financial backers. But Kilberg was among the many Christie supporters who—familiar with political setbacks—said the decision would only increase their resolve and spur them to work harder to bring in the cash needed to keep Christie’s campaign going.

Christie said on Sunday that the move had unexpectedly sparked a boom in fundraising from backers angry about the decision. And he continued to put a positive spin on the demotion on “Fox and Friends” Monday.

The demotion comes as Christie, whose very early front-runner status was crushed by a scandal involving aides creating traffic jams on a bridge into Manhattan, appeared on the cusp of a breakthrough.

A video published by The Huffington Post that shows him talking about the pain of losing a friend to drug addiction had just gone viral and had been viewed more than 7.6 million times as of Sunday evening.

While Christie has told the story dozens of times at town hall events, the response to the video underscores Christie’s raw political talent and ability to connect with an audience in ways many of his rivals cannot.

Christie and his team were also seeing signs of movement in New Hampshire, where he has now spent 46 days and hosted 33 town hall-style events. His standing in some preference polls there has improved recently. Christie has also seen substantial gains in his favorability ratings there, nationally as well as in Iowa, where his team is hoping a stronger-than-expected showing will position him to win New Hampshire.

Meanwhile, Christie and his team have tried to play down the impact of getting booted from the main stage of the fourth GOP primary debate.

Speaking Friday in New Hampshire, where he filed to appear on the state’s primary ballot, Christie said what matters is his message and the work he’s doing in those early-voting states.

“I’ll go there, debate, and as soon as I leave the debate I’ll go to Iowa and get back to work,” he said.

“We are fine,” echoed Christie senior adviser Mike DuHaime in an email. “We don’t make the rules, just play by them. Our supporters and donors know that Gov. Christie has overcome a lot more than being switched to a different stage.”

Christie supporters are even arguing that appearing on the less crowded stage will give the governor more opportunity to make his case to viewers.

“He’ll get a lot more time. He’ll get a lot more attention,” said Jim McConaha, a Republican from Concord, New Hampshire, who came to watch Christie file his paperwork. “It’s better than standing at the end of the row, leaning on the podium waiting for your opportunity to say something.”

“People are calling me and saying, ‘this is ridiculous,'” she said. “People are even more energized.”

Still, such a demotion can have repercussions. Former Texas Gov. Rick Perry saw his fundraising essentially disappear after he was relegated to an undercard debate earlier in the year. He left the race soon after.

Iowa-based Jamie Johnson, who served as senior director to the Perry campaign and is not affiliated with any candidate now, said Christie still has a chance to build on the momentum that Johnson says he’s seeing in the state.

“If there was ever a candidate who was a fighter and could find a way to bounce back after being demoted to the secondary debate forum,” he said, “it’s Chris Christie.”