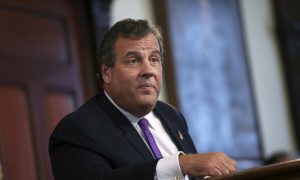 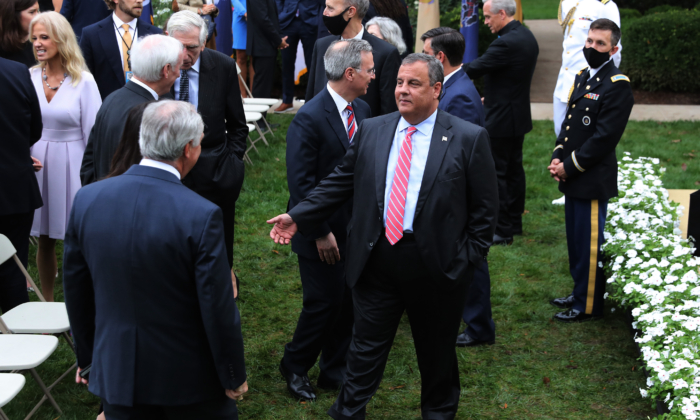 Christie Checks Into Hospital After Testing Positive for CCP Virus

New Jersey’s former Republican Gov. Chris Christie checked into a hospital on the evening of Oct. 3 after testing positive for COVID-19.

“In consultation with my doctors, I checked myself into Morristown Medical Center this afternoon. While I am feeling good and only have mild symptoms, due to my history of asthma we decided this is an important precautionary measure,” Christie wrote on Twitter.

“I am thankful for our hardworking medical professionals and look forward to coming home soon.”

Christie announced earlier on Oct. 3 that he had tested positive for COVID-19, making him the latest official in President Donald Trump’s orbit to catch the virus.

“I just received word that I am positive for COVID-19. I want to thank all of my friends and colleagues who have reached out to ask how I was feeling in the last day or two,” Christie wrote on Twitter.

Christie attended a Sept. 26 White House event during which President Donald Trump officially announced his Supreme Court nominee, making the former governor now the eighth known person who was at the Rose Garden ceremony to test positive. Trump, at the event that was attended by around 150 people, nominated Amy Coney Barrett to fill the Supreme Court seat left vacant after Ruth Bader Ginsburg’s death.

To date, of those who attended the Rose Garden event, Trump and the first lady, Sens. Mike Lee (R-Utah) and Thom Tillis (R-N.C.), former White House adviser Kellyanne Conway, University of Notre Dame President Rev. John Jenkins, and a White House journalist—in addition to Christie—are confirmed to be infected with the CCP virus.

Trump’s physician, Sean Conley, said late on Oct. 3 that the president has made “substantial progress” since testing positive for the virus. The president was fever free and didn’t require supplemental oxygen, Conley said in a statement.

“He spent most of the afternoon conducting business, and has been up and moving about the medical suite without difficulty. While not yet out of the woods, the team remains cautiously optimistic.”

Trump said in a video message released on Oct. 3 that First Lady Melania Trump is also doing well. The first lady remains at the White House, where she is resting. The White House said her symptoms are mild. Symptoms of COVID-19 include fever, aches, and chills.

“So I just want to tell you that I’m starting to feel good,” Trump said in the video message.

“You don’t know, over the next period of a few days, I guess that’s the real test, so we’ll be seeing what happens over those next couple of days.”

Referring to new treatments for COVID-19 coming out, he said, “We have things happening that look like they’re miracles coming down from God.”

Tom Ozimek and Zachary Stieber contributed to this report.