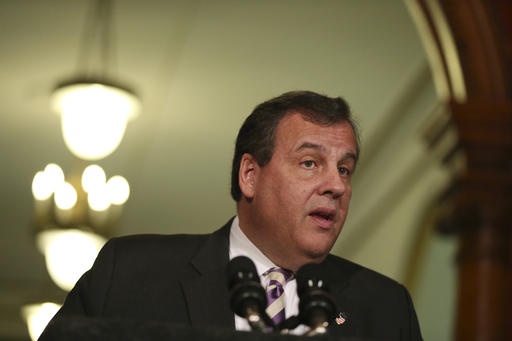 New Jersey Gov. Chris Christie stands in the Statehouse rotunda as he announces that work will begin immediately on a complete renovation of the building, in Trenton, N.J., on Nov. 29, 2016. (AP Photo/Mel Evans)
US

TRENTON, N.J.—Republican Gov. Chris Christie on Tuesday announced a four-year $300 million renovation of New Jersey’s deteriorating 18th-century Statehouse, casting the restoration as a top legacy item as he heads into his final year in office.

Christie called six decades of degradation since the last upgrade “shameful” and said there were numerous code violations and missing fire sprinklers and heating and air-conditioning ducts.

“To leave the Statehouse in this condition is an embarrassment,” Christie said. “And quite frankly it’s shameful.”

Parts of the New Jersey Statehouse date to 1792. It’s the second-oldest continuously operated state capitol in the country, after Maryland, which Christie said inspired him to pursue renovations after his friend Republican Gov. Larry Hogan gave him a recent tour.

Christie said part of the New Jersey building is in danger of sinking into the ground and crushing computer servers. Paint is cracking off exterior walls, windows have had to be strapped in for fear of falling out and flammable materials have been found in the attic, Christie said.

Senate Republican Leader Tom Kean Jr. called the restoration a “good thing.” Richard Codey, a Democratic state senator and former governor, said he supports renovation efforts but cautioned they should be done in a “cost-conscious” manner.

Democratic Assemblyman John Wisniewski, who is running for governor in 2017, said the renovations are long overdue, according to his campaign manager.

Christie is embarking on the renovation amid record-low approval ratings for him after the conviction of two former members of his circle in the 2013 George Washington Bridge lane-closure scandal.

Christie, who was demoted as Republican President-elect Donald Trump’s transition chairman after the election, reiterated that he plans to finish his term, which ends in 2018, but he didn’t rule out serving in the Trump administration.

He came into office in 2010 promising a new era of transparency and regularly holding town hall meetings. After news of the scandal broke in 2014, he answered about two hours’ worth of questions. But he canceled a press conference scheduled to coincide with the announcement on Tuesday, instead simply making the announcement from a lectern.

Christie declined to answer questions in the Statehouse rotunda and hasn’t faced the state’s press corps since early September, before trial began for two of his former allies in the 2013 lane-closure scandal. Since then, he has appeared on his regular radio call-in show to answer residents’ questions and did a national interview with Charlie Rose.

Christie denies any wrongdoing and wasn’t charged in what prosecutors said was a political payback scheme to gridlock Fort Lee for its Democratic mayor’s failure to endorse Christie for re-election in 2013. But testimony in the case contradicted Christie’s contention that he didn’t know anything about the scheme while it was happening.

The scandal isn’t entirely behind the governor.

On Wednesday, Christie faces a court date in Superior Court over a citizen’s complaint that he committed official misconduct by not reopening the lanes when he found out about their closure.

A judge will hear arguments on whether a motion brought by William Brennan, a former Teaneck firefighter and attorney, to appoint a special prosecutor should go forward. Brennan attended the Statehouse announcement Tuesday, saying afterward that a special prosecutor was needed in light of the attorney general and county prosecutor—both appointed by Christie—recusing themselves.

Christie’s office has called Brennan a “serial complainant with a history of abusing the system.” Brennan has disputed the characterization.