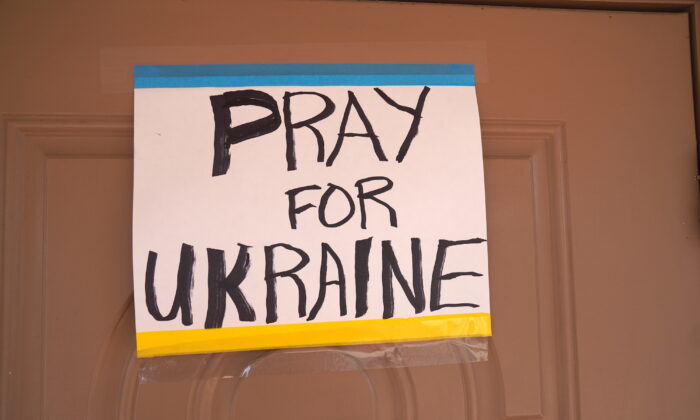 A sign displaying the national colors of Ukraine and a call for peace was placed on the door outside St. Mary's Protectress Ukrainian Orthodox Church in Phoenix, Ariz., on March 6. (Allan Stein/The Epoch Times)
US

PHOENIX, Ariz.—The morning sun is heavenly bright as the faithful begin arriving at Holy Archangels Orthodox Church in Phoenix, just minutes before the 9 a.m. start of the Sunday liturgy service.

The men have all come dressed in their best church attire. As their tradition requires, the women are all wearing skirts in muted colors, with their heads wrapped in veils.

The children are all obedient and respectful.

Upon entering the church, the parishioners make the sign of the cross and bow at the waist before they take their standing positions, waiting for the liturgy to begin in Russian.

All is quiet—except for the muffled voices of Deacon Sebastian and Priest John conversing behind gilded doors to the church rectory.

Within the hallowed church walls on March 6 is a vast array of religious images and icons, and softly glowing candles. For here, there is no political strife. No ethnic conflict. No poverty of the spirit.

The parishioners include Russians who fled Soviet communism, American converts, as well as Ukrainians—all bound by a common desire for peace and a single orthodox faith, which holds that war is a last resort.

“In orthodoxy, war is different than it is in the West. It is an absolute last resort. We’re not pacifists, but we border on it,” Deacon Sebastian said.

Therein lies the spiritual crux of the current conflict in the Ukraine, he said.

“From my perspective, that’s where the real problem is here. You can have a grievance [against NATO expansion], but that grievance doesn’t entitle you to certain types of actions,” he said.

Deacon Sebastian said that while he does not speak for the church establishment he does have an opinion of his own about the war—and that is that Russian President Vladimir Putin deciding to use military action to demilitarize the Ukraine is “unjustifiable.”

“From a moral perspective and a spiritual perspective it’s not justifiable,” he told The Epoch Times. “In other words, could he solve the problem in another way? I don’t know. But should he have done what he did? Based on the information I have, I don’t see anything that justifies that.”

“Politically, could he have done something different? I don’t know. What I can say is I don’t believe politically he’s going to get what he wants anyway.

“What his actions are going to do is what seems to be what’s been happening so far. It’s uniting the West against him. I think he’s made the situation much worse.”

“I don’t think we’ve seen anywhere yet where the brunt of this is going to be. This obviously just happened. I don’t think anybody thought Putin would really do it,” Deacon Sebastian said.

On Feb. 24, in response to the Russian invasion of Ukraine, Patriach Kirill of Moscow and All Russia issued an address. In it he called on “all parties to the conflict to do everything possible to avoid civilian casualties.”

“As the Patriarch of All Russia and the primate of a Church whose flock is located in Russia, Ukraine, and other countries, I deeply empathize with everyone affected by this tragedy,” Kirill said in the statement.

He cited a “centuries-old history” between the people of Ukraine and Russia “dating back to the Baptism of Rus” by Prince St. Vladimir the Equal-to-the-Apostles.”

“I call on the entire fullness of the Russian Orthodox Church to offer a special, fervent prayer for the speedy restoration of peace,” he said.

Priest John at Holy Archangels Orthodox Church said that while he too does not speak for the church authority, it is his belief that the Russian response in Ukraine cannot be justified by the use of military force.

“It is above all an incredible tragedy—not only for the people but for the church,” he told The Epoch Times.

“We have people with Russian roots here. People with Ukrainian roots. And they’re worried for their families and the place that they left may be lost.

“For the most part, we’re concerned with the spiritual level—the suffering—[so] that peace may be restored.

“There’s a very long history of things which contributed to [the crisis] both in the secular realm and the church realm,” he said.

Still, Priest John believes  nothing in this world is unbridgeable.

“God can make a way where we can’t see it. It takes the courage of the individual to say ‘no’,” he said.

“I have no Russian in me at all that I know of. And there are good people on both sides. We are Christians first. And that’s what should be what guides our actions.”

Outside, a table had been set up to collect medical supplies and equipment that are in short supply at hospitals in Ukraine to help wounded civilians.

“Hospitals across Ukraine are in desperate need of medical supplies. In the coming weeks, there will be more casualties, more and more suffering,” a church announcement said.

“The need for medical equipment and supplies will continue to increase. Ukraine will need medical supplies for the sick and wounded as they deal with the type of traumas associated with war.”

Victor Szwez, the church board’s president, said he places the blame on the war and its collateral damage squarely with Vladimir Putin.

“I don’t think Putin believes in God. The Russian people are God-loving people They aren’t the people who are causing this. He [Putin] is the only one who can stop it,” Szwez said.

Szwez said the church raised $20,000 in donations for humanitarian aid to Ukraine and has identified an additional $10,000 in other financial accounts.

Church assistant Anatol Prehar said “of course” he believes in a spiritual solution to the crisis.

“All the time. That’s one thing [Putin] can’t destroy,” he said.

Kristin LaRue-Sandler and her mother, Patti Burt, said they were both visiting in Phoenix when they decided to attend the Sunday morning service at St. Mary’s to show support for the people of Ukraine.

“We just wanted to do something,” LaRue-Sandler told The Epoch Times.

Burt, who lives in Butte, Montana, said she “absolutely” believes that a spiritual solution to the war in Ukraine is “the only solution.”

“It’s the counterbalance to evil,” she said.