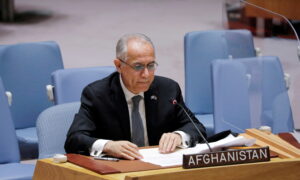 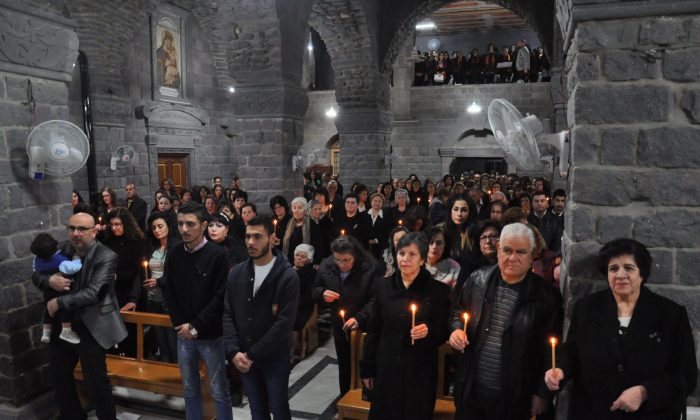 Syrian Christians attend a Good Friday mass at the Saint Mary church of the Holy Belt in the old part of the country's central city of Homs on April 14, 2014. (STR/AFP/Getty Images)
Middle East

Christians are the target of genocide in the Middle East, where they face enslavement, rape, murder, and violence under the rule of Islamic extremists. When trying to flee, they face continuing threats to their lives in Europe’s migrant camps.

In just over 10 years, the Christian populations in Iraq and Syria have been decimated, according to research compiled in the book “The Persecution and Genocide of Christians in the Middle East,” edited by Ronald J. Rychlak and Jane F. Adolphe.

The Christians, when they go to the immigration camps, are often persecuted there.

The United Nations has too often failed to help the most vulnerable communities, especially religious minorities. The result has been that countless people continue to suffer and struggle needlessly.
— Vice Presedent Mike Pence

“They also have encountered discrimination and persecution by other refugees in United Nations camps in the region and, thus, eschew them,” the book notes. “The Christians who escape ISIS depend on the Church and other private charity for their survival.”

Rychlak, a professor at the University of Mississippi School of Law, said in a phone interview that “what’s going on in the Middle East, I wouldn’t have thought it possible a short time ago, but now here we are. It’s here, and it’s undeniable.”

He noted the crimes are most pronounced under the terrorist group ISIS, but also take place under al-Qaeda and other Islamic extremist groups.

The European Parliament was informed of the crisis in November 2014 by Pope Francis, who said Christian minorities “today find themselves subjected to barbaric acts of violence: they are evicted from their homes and native lands, sold as slaves, killed, beheaded, crucified, or burned alive, under the shameful and complicit silence of many.”

When the European Union and the U.N. failed to act, Pope Francis again raised the issue, stating in July 2015, according to the Vatican website, that “today, we are dismayed to see how in the Middle East and elsewhere in the world many of our brothers and sisters are persecuted, tortured, and killed for their faith in Jesus.”

“This, too, needs to be denounced: In this third World War, waged piecemeal, which we are now experiencing, a form of genocide—I insist on the word—is taking place, and it must end,” he said.

Under the Obama administration, the State Department failed to designate the persecution of Christians in the Middle East as a genocide, after the administration had been pressed by Congress.

However, on March 17, 2016, a day after the administration issued a statement saying it needed more time on the issue, then-Secretary of State John Kerry stated that, in his judgment, ISIS “is responsible for genocide against groups in areas under its control, including Yazidis, Christians, and Shia Muslims.”

Under the Trump administration, the government is now working to bypass the U.N. to provide aid to persecuted Christians through the U.S. Agency for International Development (USAID). The announcement was made by Vice President Mike Pence during the Oct. 25 In Defense of Christians Solidarity Dinner.

Pence noted that while the Obama administration gave over $1 billion in humanitarian aid to the Middle East, the majority of that money was routed through U.N. programs.

“Yet the United Nations has too often failed to help the most vulnerable communities, especially religious minorities. The result has been that countless people continue to suffer and struggle needlessly,” Pence said, according to a transcript.

He noted that while the U.N. claims to have more than 160 projects in Christian areas of the region, Christians are no longer present in about a third of those areas. He said that in Iraq, “the majority of Christians and Yazidis remain in shelters.”

In addition, he said, “the United Nations too often denies their funding requests.”

The issue has been known for some time. Nina Shea of the Hudson Institute wrote on Oct. 7, 2016, that “the U.N.’s lead agency for aiding refugees, the Office of the High Commissioner for Refugees (UNHCR), marginalizes Christians and others targeted by ISIS for eradication in two critical programs: refugee housing in the region and Syrian refugee-resettlement abroad.”

Pence said, “We will no longer rely on the United Nations alone to assist persecuted Christians and minorities in the wake of genocide and the atrocities of terrorist groups. The United States will work hand-in-hand from this day forward with faith-based groups and private organizations to help those who are persecuted for their faith.”

“We stand with those who suffer for their faith, because that’s what Americans have always done, because the common bond of our humanity demands a strong response,” he said.

According to Rychlak, the situation may improve now that ISIS has lost its rule over areas in Iraq and Syria—areas it dubbed a “caliphate” and in which it instituted Islamic sharia (law), with devastating effects.

Under sharia, non-Muslims were discriminated against and those who refused to convert to Islam, but were still allowed to live under ISIS, were forced to pay a “jizya” tax.

Rychlak noted that the tax only became an option for Christians after ISIS destroyed all the churches and either killed or drove off the ministers. Some groups, including many among the Yazidis, were unable to pay the jizya tax.

“The jizya tax is really extortion. It’s kind of what the Nazis did,” he said, noting a case in which the Nazis went to the top rabbi in Rome and demanded a set amount of gold in exchange for the safety of the Jews. “The Jewish people got the gold, handed it over, and then the Nazis started rounding people up. It’s sort of what ISIS has done to the Christians.”

As U.S. and coalition forces continue to eliminate the terrorist organization, however, it may take time before the impact of its ideology and abuses are purged from the region.

A Department of Defense spokesperson said in an email: “ISIS presents one of the most direct and imminent threats to all people they encounter, enslave, and subjugate worldwide. They must be defeated, not just militarily, but via a whole-of-government approach which prevents the conditions which allowed them to come to power in the first place.”

The spokesperson noted that the United States is working alongside its local partners in the efforts and “have thus far been enormously successful at achieving that goal and exposing [ISIS] for the inhumane criminal element they are.”

According to Rychlak, the Trump administration is prepared to treat the crisis as a genocide and bring more necessary relief to the victims, but “it’s still going to be tough.”

“The fact that the United States is bringing aid is not going to stop the persecution,” Rychlak said.

“The greatest hope, I suppose, is that we drive ISIS out of control, the caliphate collapses, and we see a return to a Western mindset, let’s say, where people of different faiths are welcome to thrive alongside one another, which is how so many of these nations were a decade or two ago.

“If we get back to that, I think everybody would be happy,” he said. “But as it is now, it’s a very difficult and sad case.”

If you feel this topic is important, please consider sharing this article. Thank you!