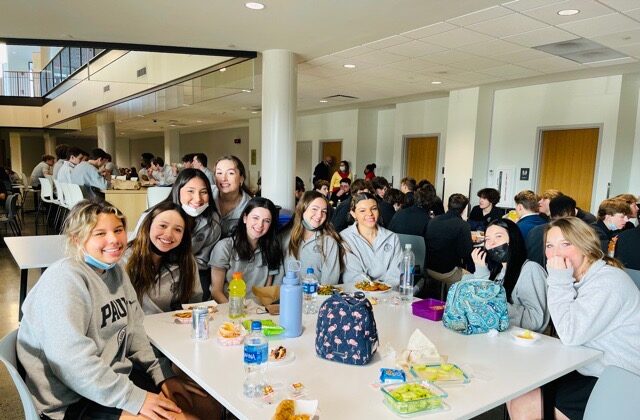 FAIRFAX COUNTY, Va.—For the first time in two decades, St. Paul VI Catholic High School in Virginia has a waitlist, which is occurring not long after a move to a larger campus that expanded the school’s capacity by 20 percent, or 200 students.

Paul VI, as locals call it, has enjoyed double-digit growth for the past two years: 12 percent in the 2020–21 school year and 13 percent in 2021–22. With the current student count at 1,090, the school is anticipating another 8 to 9 percent increase in the school year 2022, according to Billy Atwell, chief communications officer of the Diocese of Arlington.

In the summer of 2020, Paul VI moved its campus to Chantilly, a city about 10 miles west and much closer to the neighboring Loudoun County, from Fairfax. Before the move, enrollment from Fairfax County was a clear majority at 64 percent during the 2019–20 school year, according to Ginny Colwell, head of school at Paul VI. Since then, the proportion of students from Loudoun has grown steadily to 47 percent from 27 percent.

In recent years, Loudoun County has become a known name nationally for locals’ fight for parental rights and against critical race theory (CRT), a quasi-Marxist framework that says the United States is systematically racist and views society and institutions through the lens of race. While Loudoun County Public School officials have repeatedly denied that its schools teach CRT, parents have argued that CRT views have seeped into the daily teaching at schools under its program of “social-emotional learning,” which has taken priority over academics.

For many parents, the pandemic, which caused schools to switch to virtual learning, offered them an opportunity to better understand what their children were being taught at school. That prompted growing protests against a range of ideas, including Marxist-rooted doctrines such as CRT being transmitted in classrooms.

As the pandemic dragged on, more parents raised objections to COVID-19 measures implemented by schools, including virtual learning and mask-wearing. Parents, including those in Loudoun and Fairfax counties, began pressing their local public schools to reopen.

Paul VI reopened with hybrid learning in the 2020–21 school year; half of the student body would be on virtual learning at any one time, done on a rotating schedule. It returned to in-person learning the next school year.

By contrast, Fairfax and Loudoun County public schools switched to hybrid learning in early 2021, and in-person classes in the fall of 2021. Loudoun County kept the mask mandate in schools until Feb. 17, after losing a case to parents in Loudoun County Circuit Court. Fairfax County, meanwhile, didn’t make masks optional in schools until March 1, the effective date of the change mandated by a new Virginia law.

Paul VI’s Colwell said there was an above-average number of transfers from public schools this year: 60, compared to the average number of 30 to 40. More than 30 of those are from Loudoun County Public Schools and nearly 20 from Fairfax, the largest public school district in Virginia, with more than 180,000 students from 198 schools, compared to Loudoun’s 80,000 from 97 schools.

From the fall of 2019 to the fall of 2021, Fairfax County public schools lost more than 10,000 students, or 5.4 percent of the population; that’s the most students lost by any district in the state, according to data from the Virginia Department of Education. Loudoun’s public schools lost 2,400 students, or 4 percent, the fourth-highest number of students lost by a school district.

For students who switched to Christian or Catholic schools, the pandemic appeared to be a major driver.

“Half of the public-school transfer students were unsure or would not have enrolled in the school if the pandemic had not happened,” according to a 2021 report by the National Catholic Educational Association, which examined data collected in December 2020.

This summer, Evergreen Christian School (ECS), a new high school in Leesburg, in Loudoun County, finishes its first school year at its current location. It was founded in 2019 and began its first year with 37 students in the ninth and 10th grades.

Its enrollment for the 2022–23 school year is 80 and growing. Earlier this year, the school moved to a new building with a maximum capacity of 250 students.

Michael Dewey, head of school at ECS, said he expected to hear from parents who transferred their children there that they were “fed up with what’s going on in public schools,” given the county parents’ dissatisfaction with the state education system.

But to his surprise, it wasn’t the sole driver for the move. Families told him that they had always thought about Christian education for their kids, believing it would help reinforce positive values and pass on their religious heritage.

“Then, what happened in the pandemic and what’s going on in public schools put them where they decided to finally act on it,” Dewey told The Epoch Times.

The 80 students he personally interviewed in the admissions process also gave him a pleasant surprise. He expected to hear from the prospective students that the school was their parents’ choice. Instead, more than half told him they had suggested the school to their parents.

“That just blows me away,” he said, adding he expected to get “exiles” from public schools, yet found himself with “mission matches”—believers of solid convictions and values. He said that while higher testing scores are a usual draw for private education, faith was the dominant consideration for prospective entrants to his school because, being so new, the school hadn’t yet proven itself with academic results.

Five years ago, Lou Giuliano, chairman of the board of ECS and a business executive, began his efforts to create a Christian school in Loudoun County.

“We were not doing this as a response to what’s happening in public education,” he told The Epoch Times.

Instead, the initiative was based on his daughters’ and family’s positive experience with a Christian school.

“We want to partner with the family and the church to be a kind of a three-legged stool to support the growth and development of children to be disciples in the future,” Giuliano said.

He says students with faith are laughed at in most of today’s colleges.

“They talk about what their faith means to them; they are told, ‘You are delusional.’ So how are they going to withstand that if they are not grounded and haven’t tested their own faith beliefs with people who understand both sides of the story?”

The school’s “Essential Questions” project runs through all four years and culminates in a senior thesis project and oral defense before graduation. According to Dewey, it’s designed to help students articulate the Christian worldview and develop critical thinking skills.

One question, according to a school brochure, asks, “Is science the enemy of faith?” Another asks, “How has postmodern literary criticism impacted the notion of objective truth?”

Amy Rogers, a mortgage adviser and mother of four, moved to Loudoun County seven years ago for its public schools. But growing frustration with the public education system caused her to move her son Tyler to ECS last year for 10th grade. Rogers has kept her two daughters in local public schools to finish their participation in existing learning programs, and her youngest daughter is homeschooled.

“All A’s and no substance,” she said about Tyler’s public school education. For her, the decision to move Tyler to ECS was born out of a combination of “a huge leap of faith” and wanting to escape from public schooling.

Travis Lassiter, a business development professional at a local defense firm and father of two daughters, described the school’s plan and vision as “very, very solid.” His eldest, Kendall, transferred from another Christian school in Fairfax County and joined ECS in 2021 in the 10th grade.

“I felt like God was working in that area, for being able to provide Christian learning opportunities within Loudoun County,” Lassiter told The Epoch Times.

“We wanted to be a part of that and be a founding family to enable that for not just our daughter, but for other people within our community as well.”

Over at St. Paul VI High School, Colwell also sees that parents have given faith a higher priority in their children’s education.

“I think that we have students who are Catholic who are in the public schools, and the parents had never really come to Catholic schools but suddenly see that we are open, and we are living our faith, and they are deciding that this is important to them,” she said.

Eighty-two percent of the students at Paul VI are from Catholic families.

“My admissions director meets with parents, and most of them ask about the faith first before they ask about academics and sports,” she said.

The median member school in the United States expanded its K–12 enrollment by 12 percent in the 2020 school year from 2019, according to the Association of Christian Schools International (ACSI), which serves 2,079 Christian schools in 50 states. Information about the 2021 school year isn’t yet available.

“Many school leaders indicated that their growth in enrollment was attributable to their schools reopening safely for in-person instruction, as well as the school’s Christian mission which prospective families could see reflected in the school community’s care for each other during the challenges of the pandemic,” ACSI said in an emailed statement to The Epoch Times.

On the Catholic side, data from the National Catholic Educational Association (NCEA) shows that Catholic school enrollment in the United States experienced its first increase in two decades.

Enrollment in Catholic schools for the 2021–22 year grew by 3.8 percent year-over-year to about 1.69 million across 5,900 schools. Meanwhile, Catholic schools also experienced the least number of closures in two decades; 71 Catholic schools closed or merged, compared to an annual average of about 100.

In addition, more than a third of all Catholic schools had to put students on waiting lists for admissions for the 2021–22 school year.

Although this year’s gains didn’t bring enrollment back to the pre-pandemic level of 1.74 million students, Catholic schools have 40,000 more than the NCEA expected, based on a 2 to 3 percent annual decline in recent years, according to Annie Smith, NCEA’s vice president of data and research.