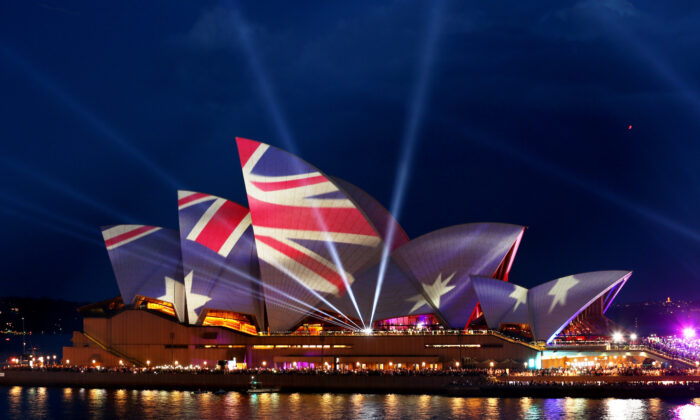 The Australian flag projected on the sails of the Sydney Opera House in Sydney, Australia, on Jan. 26, 2020. (Don Arnold/Getty Images)
Viewpoints

Christian Roots of the Australian Commonwealth

Australia is in the process of disentangling the law from its Judeo-Christian roots.

In contemporary Australia, writes Michael Quinlan, dean of law at the University of Notre Dame Australia (pdf), “an observation that a particular law is consistent with or that it has been derived from Christian morality is more likely to be raised as a source of complaint and derision by persons seeking to change the law than recognised as a grounds for maintaining a traditional position.”

The last census indicates that most Australians associate Christianity with intolerance and bigotry. They tend to consider Christian beliefs outdated and ultimately a negative influence on society.

Curiously, however, Christianity remains infused in both the legal and governmental institutions and customs of Australia. These religious influences started with the first British fleet departing for Australia in 1787 when Captain Arthur Phillip was instructed to enforce due observance of the Christian religion and to take such steps as were necessary for the celebration of public worship.

Held between 1891 and 1899, representatives of every colony in Australia attended conventions that agreed on the elaboration of a federal Constitution. Upon the request of these colonies, the UK Parliament passed the Constitution of Australia Bill, on July 5, 1900. Queen Victoria assented four days later and proclaimed in September that the Commonwealth of Australia would come into existence on the first day of the 20th century (Jan. 1, 1901).

On that occasion, one of the Constitution’s leading authors, Sir John Downer of South Australia, stated: “The Commonwealth of Australia will be, from its first stage, a Christian Commonwealth.”

At the Birth of the Nation

According to law professor Helen Irving,

“During the 1897 Convention, delegates have been inundated with petitions in which the recognition of God in the Constitution was demanded … The essence of their petition was that the Constitution should include a statement of spiritual—specifically Christian—identity for the new nation.”

The overwhelming public support at the time for a religious statement reflected the view that the validity and success of the endeavour ultimately depended on the providence of God.

As stated by Dyson Heydon QC, a former High Court justice of Australia, reference to God in the constitution “reflected what the elite of the Federation generation saw as fundamental.” This was based on the idea that the new nation should be “moved by spiritual impulse towards one mighty destiny.”

The opening of the first Parliament of Australia suggests a society that was entirely comfortable with the role of religion in the public square. The first elected Members of Parliament filed in and proceedings commenced with the “Old Hundredth,” a song based on Psalm 100.

The first governor-general of Australia, Lord Hopetoun, then delivered the prayers for their Majesties, the King and Queen, and for the new Parliament of Australia. He bowed his head, and the multitude joined in the Lord’s Prayer.

These proceedings suggest a Christian society that understood the new nation in religious terms.

Of course, things have dramatically changed, and now Australia is no longer a particularly religious society. However, religious practices still permeate some of our legal-institutional traditions. For example, prayers are still conducted prior to opening proceedings at the federal Parliament.

So whether or not our system of constitutional monarchy is a “blessing of God” or an “invention of the devil,” it is quite undeniable that Christian principles and traditions played a fundamental role in the development of Australia’s legal-political institutions.

To state this historical fact is not to be intolerant of other religions but to stress an undeniable truth. But the nation’s impressive Christian heritage is increasingly doubted, suppressed, and even denied as our contemporary society moves away from Christianity toward radical secularism.