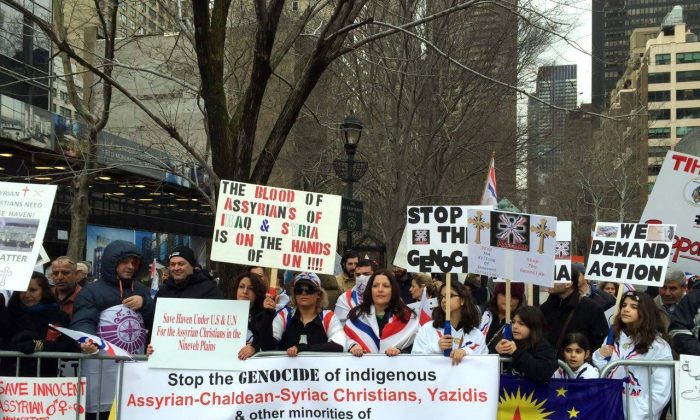 Middle Eastern Christians of all denominations protest in front of U.N. headquarters in New York in June 2014. A grassroots group of overseas Assyrians is working to aid other Christian minorities in the Middle East, whose very survival hangs in the balance. (Courtesy of ADFA)
News

Christian Genocide Survivor Group Fights to Save Others in Crisis

They survived a slow-motion genocide during the twilight of the Ottoman Empire in the 19th century, then outbursts of brutality by Iraq’s Saddam Hussein and Iran’s Khomeinists.

In 2014, when ISIS extremists invaded their ancestral homeland, the Plains of Niveveh in Northern Iraq, and went on a murderous rampage, it was the last straw for these Assyrians (not to be confused with Syrians, and also known by other names such as Chaldeans and Syriacs). They were forced to stare the darkest forces of inhumanity in the eye and to suffer agonies of imprisonment, torment, and torture.

They witnessed their loved ones being massacred, their churches desecrated, and their ancient monuments destroyed.

Descendants of a warrior race of ancient Mesopotamia, the fertile crescent between the Euphrates and Tigris rivers (currently the Middle East), these native speakers of Aramaic—the language that Jesus and his disciples spoke—once controlled a series of mighty empires. Later, they were among the first people in the world to convert to Christianity.

Today, their very survival hangs in the balance, while the world in general is unaware of their plight. Attacked by fellow refugees in U.N. refugee camps because of their religion, they are often forced to seek shelter in churches and private homes. Returning to their home countries is not an option for most because of the fragile security situation there.

Christians in the Middle East now comprise just 3–4 percent of the population, down from 20 percent a century ago, with much of that reduction occurring in the last 15 years.

After the fall of Mosul

On that fateful day in June 2014 when Mosul fell to ISIS, an estimated 500,000 civilians fled the city in a terrified exodus, among them 200,000 Christians and 200,000 Yazidis, another minority religious group targeted by ISIS.

This was a turning point for several people. One was Nuri Seyhan Kino, 53, a journalist and filmmaker from Sodertalje, Sweden. A descendant of genocide survivors himself, Kino and his family had been fortunate to escape to Europe and to rebuild their lives when Turkish-Cypriot turbulence shook their hometown of Midyat, Turkey, in the 1970s.

Kino had foreseen this latest catastrophe that would befall his people and had warned the international community through his writing and documentary films. But few in power took heed, and almost none came to the aid of his people facing an ongoing crisis.

“Struggle has always been part of my life,” he says, as he narrates his family story of persecution and survival.

In June 2014, determined not to let his people go down the black hole of history without at least one more do-or-die battle, Kino mobilized a team of 25 volunteers from around the world. They simultaneously launched a massive social media campaign, sending over 15,000 emails alerting the international community to the pending tragedy, and coordinated protests around the world.

“I remember that day,” says Helma Adde, a Chicago-born Assyrian-American schoolteacher, one of the volunteers Kino recruited. “We staged a protest in front of the U.N. headquarters.”

Adde said the initiative forever changed her quiet, family-focused life. She became an activist, and eventually the protagonist of a documentary called “Our Last Stand,” a moving portrayal of the plight of her people in Iraq and Syria

The initiative was the genesis of A Demand for Action (ADFA), now incorporated as an NGO in Sweden, with representatives in cities with significant Middle Eastern Christian populations, such as Washington, Toronto, Melbourne, and Berlin. Its mandate is to protect all Assyrians/Chaldeans/Syriacs as well as other Middle Eastern minorities.

Composed entirely of volunteers and funded by Middle Eastern Christians of all denominations in the worldwide diaspora, ADFA has taken on a variety of projects in support of all minorities from the Middle East regardless of their faith and ethnicity. The projects range from lobbying governments and speaking to international media, to bringing medical relief to refugee camps.

Has this grassroots initiative, with scarce funds and few resources, changed anything for the better?

“It’s difficult to measure the [legislative] impact we’ve had,” Kino says, but he cites a few examples that highlight the credibility ADFA has achieved in the forums of power. He has been invited to address the United Nations as well as the United States and British parliaments, where he pleaded the cause of people largely ignored—even by human rights-defending governments.

When Knox Thames, special adviser for religious freedom at the U.S. State Department recently visited Sweden, ADFA was one of the only two organizations he met with. At the meeting, they discussed the recent U.S. State Department  decision to send aid directly to Christian refugees without intermediaries.

Results of the other aspect of ADFA’s work—bringing supplies (such as sleeping bags) and medical relief to refugee camps—are more visible.

Kino is perpetually on high alert. If there is trouble in a refugee camp or injustice done to asylum seekers in any country,  he is instantly on the case—informing the world through his journalism and deploying his troop of volunteers to bring immediate relief to the victims, regardless of  whether they are from Christian, Yazidi, or other Middle Eastern minority backgrounds.

“Nobody sleeps until the job is done,” he says.