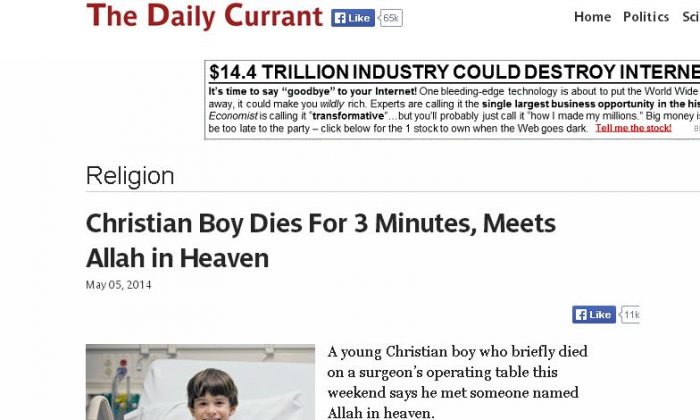 An article saying that a “Christian Boy Dies For 3 Minutes, Meets Allah in Heaven” is satire.

The article was published on The Daily Currant, a satirical news website that doesn’t post real news.

The article about the “Christian boy” got thousands of shares on Facebook.

It reads, “A young Christian boy who briefly died on a surgeon’s operating table this weekend says he met someone named Allah in heaven,” adding: “Bobby Anderson, the son of a well-known Christian pastor in Atlanta, suffered internal injuries from an automobile accident and was technically dead for 3 minutes before being resuscitated. During that time the 12-year-old claims he visited the afterlife and spoke to several leading figures of the Islamic religion.”

The Daily Currant has a disclaimer, which explains what it is all about.

“The Daily Currant is an English language online satirical newspaper that overs global politics, business, technology, entertainment, science, health and media. It is accessible from over 190 countries worldwide – now including South Sudan,” the disclaimer reads.

It adds: “Our mission is to ridicule the timid ignorance which obstructs our progress, and promote intelligence – which presses forward,” saying also that “our stories are purely fictional. However they are meant to address real-world issues through satire and often refer and link to real events happening in the world.”