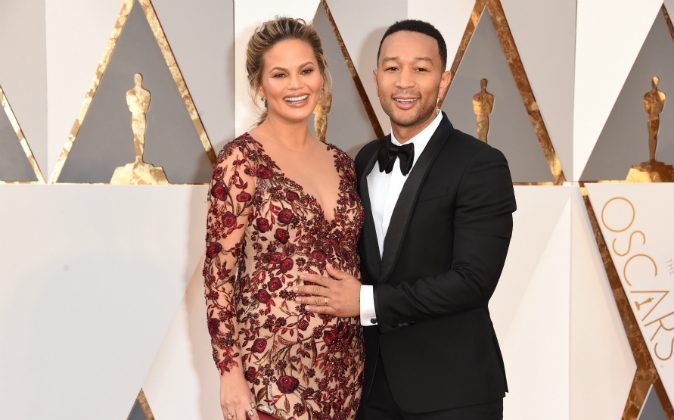 First time mom, Chrissy Teigen prepared herself for motherhood as much as she could before the birth of daughter, Luna Simone. However, she wasn’t prepared for the backlash she received after attending a dinner with husband, John Legend.

“It was about nine to ten days after,” Teigen told Michael Strahan during the May 17 broadcast of “Good Morning America.” “I mean we needed a break. We needed to go enjoy each other’s company and be out.”

When Teigen and husband John Legend enjoyed a dinner out at West Hollywood’s hotspot The Nice Guy on April 23—only two weeks after the birth of their daughter—fans reprimanded the supermodel mother for leaving the newborn at home.

One Instagram user Bronzebeauty79, wrote: “She’s hitting the streets already???? Damn these so called celebrities want to show off so bad after giving birth. Spend bonding time with your baby and not let the nanny or babysitter raise them!”

Teigen responded via Twitter to the chatter surrounding her choice to have dinner, but also admitted she was surprised that dinner caused such an uproar.

“I didn’t think it would come from going to dinner,” said the 30-year-old model. “That’s not something I thought would happen.”

She continued, “But listen, we were gone for an hour, and we had a good dinner. I think happy mommy, happy daddy, happy baby…”

The cookbook author also thanked her husband for supporting her against parenting style critics.

When comedian Desi Lydic satirically addressed mom bashers on the May 9 episode of “The Daily Show With Trevor Noah,” including those who shunned Teigen, Legend took to Twitter to show his approval.

“You’re worried about the quality of John Legend and Chrissy Teigen’s child care? It’s not like they’re getting their nanny off Craigslist. They’re rich celebrities,” said Lydic. “They could get Mary Poppins to watch their baby, as in literally call Julie Andrews, get her to come out of retirement to babysit in character as Mary Poppins.”

Legend tweeted, “Funny there’s no dad-shaming. When both of us go out to dinner, shame both of us so Chrissy doesn’t have to take it all. We’ll split it.”

“He had my back with that one, so thank you John,” Teigen said.