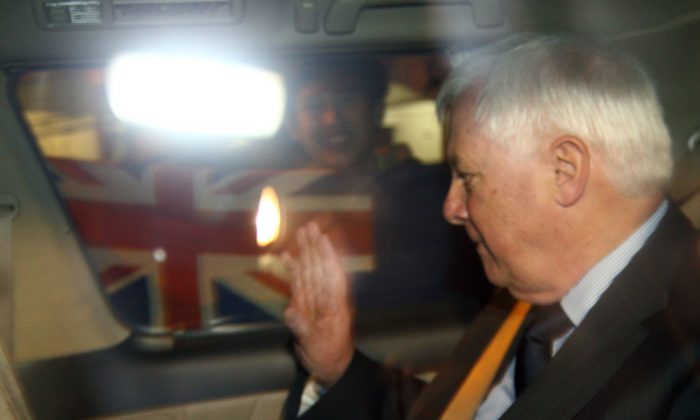 The Last Governor of Hong Kong Christ Patten is welcomed by Hong Kongers when he attends the opening of Maritime Museum in Central on March 20, 2014. (Poon/Epoch Times)
China

Chris Patten Speaks Out for Hong Kong on Political Reform

HONG KONG—The ruling issued by the National People’s Congress (NPC) in Beijing on Aug. 31 came as a critical blow to those fighting for universal suffrage in Hong Kong.

The NPC’s decision was that while Hong Kongers will indeed have the right to vote for their chief executive in 2017, all chief executive candidates will have to receive the approval of at least half of a 1200-member nominating committee—one that is largely composed of Beijing supporters.

In the wake of this ruling, Chris Patten, the final governor of Hong Kong prior to its handover to China in 1997, commented on the situation in a column for the Financial Times on Sept. 2. He likened Beijing’s proposed plans for vetting all candidates to the state-run democracy in place in Iran.

“On this occasion my comments are not directed principally to Beijing or Hong Kong’s democrats,” Patten said in his column.

Instead he “invited an interrogation of Britain’s sense of honour.”

Specifically, Patten alluded to the Sino-British Joint Declaration agreed upon before Hong Kong’s handover. He stated that the British were “honour bound to speak up for Hong Kong” due to their “moral responsibilities for what happens in Hong Kong.”

He suggested that the Joint Declaration lay above the potential political consequences incurred by Britain. The declaration guarantees Hong Kong’s capitalist way of life until 2047 and came into effect as Hong Kong was passed from British to Chinese rule in 1997.

Patten said Britain promised Hong Kong democracy, and he expressed his surprise that “30 years after the Joint Declaration, a fair electoral system would still be beyond the horizon.”

Patten summarized his reasoning: “We did promise [Hong Kong] democracy. We should go on making that point, ever so diplomatically. If not us, then who?”

Patten’s words were received with some disagreement. The Hong Kong chief executive’s office issued a statement alleging that Patten was hypocritical because he, like other governors of colonial Hong Kong, was not democratically elected to the position.

The statement added that the Joint Declaration made no mention of universal suffrage for Hong Kong, and that the promotion of political development in the territory was an internal matter which should be decided by the central Chinese government and the people of Hong Kong.

“I don’t really know what Mr. Patten was talking about,” Fan said.

She pointed out that the chief executive was only to be appointed by the central government “on the basis of the results of elections or consultations to be held locally.” Universal suffrage, she noted, was not explicitly mentioned in the Joint Declaration.

Occupy Central with Love & Peace (OCLP), a movement for universal suffrage in Hong Kong, also issued a statement after the ruling. OCLP condemned the NPC Standing Committee’s decision to “set an extremely narrow framework for the 2017 Chief Executive election.”

OCLP was unwavering in face of this setback and maintained that its position to fight for equal and universal suffrage in 2017 was in the best interests of the Hong Kong public. It added regretfully that its planned non-violent occupation of Hong Kong’s Central district, which OCLP considered a last resort, will “definitely happen” now that “all chances of dialogue have been exhausted.”

Finally, OCLP urged the Hong Kong Legislative Council “to vote down this reform proposal and the government to start the constitutional reform process all over again.”