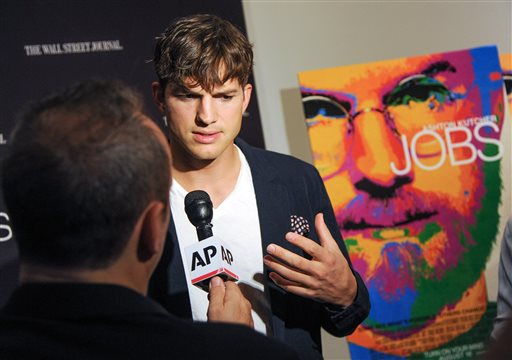 Actor Ashton Kutcher is interviewed as he attends a special screening of "JOBS" hosted by The Wall Street Journal at the Museum of Modern Art on Wednesday, Aug. 7, 2013, in New York. (Photo by Evan Agostini/Invision/AP)
Entertainment

Ashton Kutcher, during the Teen Choice Awards on Sunday, said that his real name is Chris Kutcher.

The “Two and a Half Men” star said that he took the name Ashton–his middle name–when he first started acting at 19 years old.

“I feel like a fraud,” he said. “My name is actually not even Ashton. Ashton is my middle name. My first name is Chris.”

Kutcher, 35, got the Ultimate Choice Award at the awards show.

“Okay, let’s be brutally honest — this is the old guy award,” he said. “This is like the grandpa award, and after this, I get to go to the geriatric ward.”

Kutcher then went on to give the mostly teenage audience advice.

“I’ve never had a job in my life that I was better than,” he said. “I was always lucky just to have a job. And every job I had was a stepping stone I had to my next job and I never quit my job until I had my next job.”

Perhaps not so coincidentally, Kutcher will star in the upcoming Steve Jobs biopic “Jobs.”