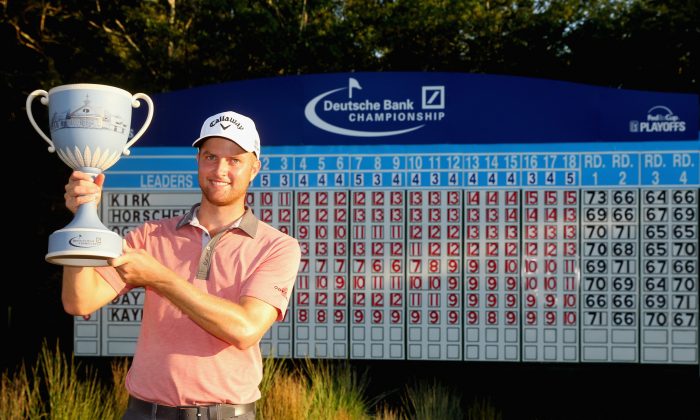 Chris Kirk is presented with the winner's trophy after winning the Deutsche Bank Championship at the TPC Boston. (Jim Rogash/Getty Images)
Golf

Norton, MA—Given the topsy-turvy nature of golf this year on the PGA Tour one had to rightly assume that nothing this final weekend before Ryder Cup Captain choices are made would be anything other than a mad scramble for attention.

It was most certainly that—and more.

Chris Kirk had received little thought leading into the second leg of this year’s FedEx playoffs with the playing of The Deutsche Bank Championship just outside of Boston. The 29-year-old Georgian had won late in 2013—ironically in Georgia of all places—and needed make a major statement, while also hoping for a few breaks to go his way.

Kirk fired a 130 total over the weekend, with no bogeys on the card in the final round. He got back into the fray with a sizzling 7-under-par 64 on Saturday, when paired with the world’s number 1 player Rory McIlroy, who matched Kirk’s score for the day. The two were paired again on Sunday and Kirk didn’t flinch—besting McIlroy on the day by four shots with final round 66 that included three key-holed putts on the inward half.

Kirk was aided by the fact that one of his chief challengers—Billy Horshel—failed to birdie the par-5 18th after hitting a colossal tee shot left that him nothing more than a 6-iron into the green. Horshel’s iron was poorly hit and barely reached a frontal hazard. Net result—bogey and a three-way tie for second.

Now the spotlight—or shall it be called the “hot” light—falls on Tom Watson. Tuesday night the eight-time major-champion and current Ryder Cup Captain will announce his three captain choices. The American squad is set to face a formidable European squad at the end of this month at Gleneagles in Scotland.

It is hard to say with any certainty how Watson will decide things. Fortunately, the distraction of whether Tiger Woods would play or not play is out of the picture. The main issue is how much strength does Watson give to recent form and how does he balance that with whether past participation in previous Ryder or President Cup Matches really means. Past USA Ryder Cup Captains have sometimes overdosed on the experience side of the meter and when the matches were played those who were thought most capable in providing needed points in critical matches failed to do so.

Given what has happened in the last two weeks of this year’s playoffs it seems likely that last week’s winner at The Barclays Hunter Mahan and former U.S. Open champion Webb Simpson—who finished in a tie for 9th—are primary contenders for consideration. Local New England favorite and former PGA Champion Keegan Bradley also played well this past week, finishing in a tie for 16th. Kirk has now entered the picture in a big time way. Fortunately, Watson has the luxury in knowing that former team member Dustin Johnson will not be playing because of a personal leave from the PGA Tour, so one additional spot will be available. There is also the uncertainty with another team member—Jason Dufner—out recuperating from a neck injury.

Watson has played a very tight poker hand in the lead-up to tonight’s selections. This year’s American squad will not be the favorite when the matches are played and the pressure will certainly be on the Europeans to show they merit all the hype in leading up to Gleneagles. It’s also possible this particular American Ryder Cup team may have some new young horses ready to step up where past “veterans” have failed to do so.

As they say at The Oscar’s—the envelope please.