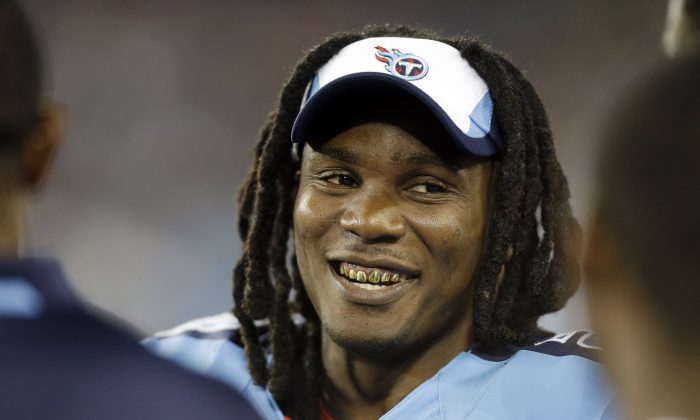 Then-Tennessee Titans running back Chris Johnson talks with teammates on the sideline in the third quarter of a preseason NFL football game against the Washington Redskins, in Nashville, Tenn., on Aug. 8, 2013. (AP Photo/Wade Payne, File)
US

Chris Johnson, the former Tennessee Titans running back, was reportedly shot in Florida, according to media reports. The driver, Dreekius Oricko Johnson, was killed, according to USA Today.

Johnson, who last played for the New York Jets, was shot during a drive-by shooting on Saturday, says Yahoo Sports.

He was in a car with friends when it was hit by shots.

Johnson is recovering at a hospital now.

Just received scary news that Chris Johnson was shot in FL last night. Been training w us in LA but went home for weekend. Damn.

Ex-#Jets RB Chris Johnson is recovering at an Orlando hospital after being shot in the arm last night, source said. He is going to be OK

Chris Johnson was back home, riding around with friends and his car took gunfire, source said. There were casualties, including a friend

The Orlando Sentinel has more:

One man is dead and two were injured in a drive-by shooting in Orlando early Sunday morning.

The shooting took place at about 4:09 a.m. at the intersection of Southland Boulevard and Orange Blossom Trail, several blocks north of the Florida Mall, the Orange County Sheriff’s Office said in a statement.

Deputies responded to a shooting call and arrived to find a Jeep the driver dead inside and two other men with gunshot wounds on the sidewalk.

The victims said that an unknown vehicle pulled up beside them at the red light and opened fire into the Jeep, deputies said.