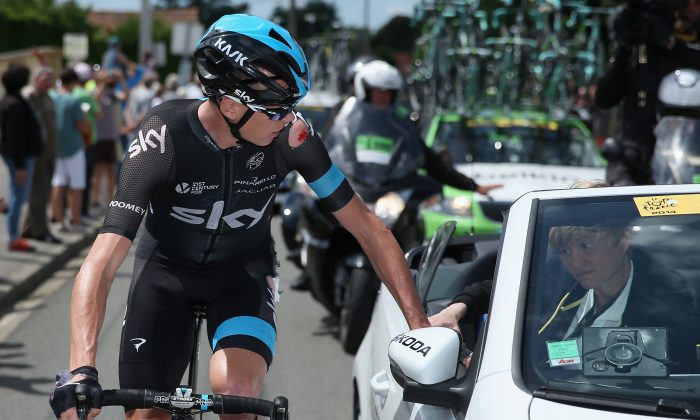 Chris Froome to Lead Team Sky in Vuelta a España

MANCHESTER, England—2013 Tour de France winner Chris Froome will lead Team Sky in the 2014 Vuelta a España after recovering from injuries which forced him to withdraw from the Tour de France.

Froome was forced to abandon the Tour de France on the fifth stage on July 9 after falling from his bike three times in two days, breaking his wrist and hand.

“This is exactly the sort of challenge that I need after the disappointment of withdrawing from the Tour de France,” Froome told CyclingNews. “You can’t dwell on disappointment, you have to move on quickly to next thing and the Vuelta has become the perfect race for me to focus on.

“I’ve always really enjoyed racing at the Vuelta, it’s a tough race but a great opportunity for the whole team. I know that the level of competition will be incredibly high this year, but we’ve got a strong line up so we hope to be as competitive as possible.”

Froome finished second in the Vuelta in 2011 and fourth in 2012, the last time he competed there.

Froome’s withdrawal from the Tour de France, followed by that of Tinkoff-Saxo team leader Alberto Contador with a broken leg, ended a highly anticipated  fights for cycling dominance between what are arguably the two best riders of this era.

Contador announced last Thursday that he would be competing in the Vuelta, but said he would be hoping for a stage win at best; he hadn’t had enough time to regain his full form after breaking his tibia in July. Possibly Contador is being coy, and is actually on fine form; more likely he is being totally honest, and will be riding for his Spanish fans, not for the GC win.

The 2014 Vuelta a España begins on Saturday with a team time trial in Jerez de la Frontera.