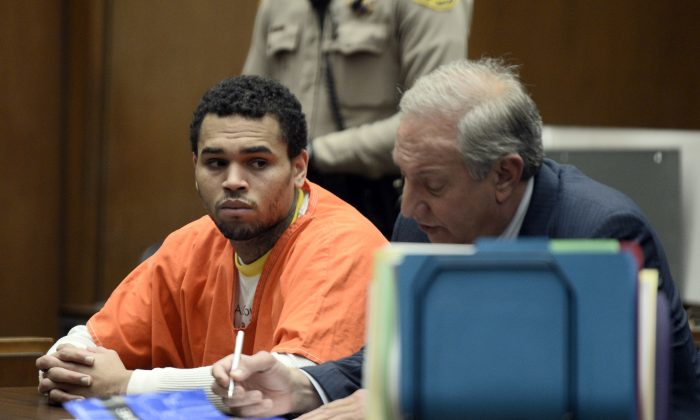 Chris Brown, left is shown in court with his attorney, Mark Geragos Friday May 9, 2014 in Los Angeles. Brown on Friday admitted a probation violation over an altercation last year outside a hotel in Washington, D.C., and was sentenced to remain on probation and serve an additional 131 days in jail. (AP Photo/Paul Buck, POOL)
Entertainment

Chris Brown, who currently is in jail after he was ordered to stay there when he admitted to violating probation, is said to be writing music with R&B singer James DeBarge.

DeBarge is located in a cell next to Brown’s cell, TMZ reported.

The two artists apparently cannot see one another but they’ve already written three songs together.

DeBarge, who was married to Janet Jackson for a spell in the 1980s, is incarcerated for drug charges.

He was part of the group DeBarge, known for “Rhythm of the Night” and “Who’s Holding Donna Now?”

Los Angeles County Superior Court Judge James Brandlin handed down a jail sentence to brown in May after he admitted to violating probation by committing a crime in Washington D.C.

Brown’s lawyer, Mark Geragos, told CNN more than a week ago: “If he isn’t out by Monday, then I would expect he’s getting special treatment. He’s got over 230 days credit on a 365 (day sentence) and generally the sheriff is releasing on a lot less than that.”

Brown also has to complete around 700 hours of community service. He also has to attend anger management and family counseling classes each week, while submitting random drug tests.

When he gets out, Brown will also be on probation, the judge said.