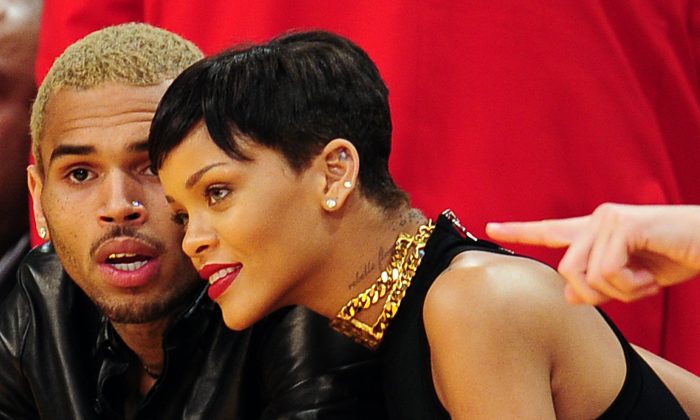 Rihanna (R) and Chris Brown attend a game between the New York Knicks and the Los Angeles Lakers during the NBA game at Staples Center in Los Angeles, California, on December 25, 2012. (AFP/Getty Images)
News

Chris Brown and Rihanna ‘Back Together’? No Evidence Claim is True

A blog post claiming Chris Brown and Rihanna are “back together” and that Karrueche Tran is “a player again” appears to be without basis.

The post on Thy Blackman claims that Brown, “feeling nostalgic,” posted a picture on December 3, 2014 Instagram of Rihanna snuggling with him.

The post then cited MTV as reporting that the picture got over 10,000 likes and thousands of comments in the 30 or so minutes before Brown deleted it.

The problem is, the picture was actually posted two years ago–and there’s no evidence that Brown re-posted it this week. There’s no MTV story about Brown reposting it, and stories from other outlets cited in the report are also from 2012.

“Chris Brown continues his North America tour while Rihanna is vacationing in the Barbados. Due to their past tumultuous relationship, many hope they will remain friends, but keep their distance regarding romance.,” Thy Blackman claimed.

“All in all this love triangle seems to be heating up again. Rihanna, nor Karrueche Tran are able to keep Chris Brown for a long period of time.”

So basically the post is a jumbled collection of articles from two years ago, purporting to pass as news today.

There were break up rumors regarding Brown and Tran split up, but Tran later clarified a tweet that fueled the speculation. “Looks like I’m a single lady again,” she said in the tweet.

“I was talking about the show Single Ladies.. I just came back from shooting an episode lol gee wiz,” she said later.