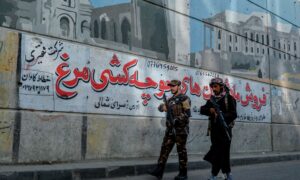 A former patient of a hospital in China says she saw and heard things during a lengthy hospitalization that makes her believe the hospital was involved in murdering people to harvest their organs.

Ms. Li Jinzhen (not her actual name), a Chinese national, said she has known for some time about allegations that Falun Gong practitioners in China have become involuntary donors of organs for the transplantation trade over the last dozen years.

Li, who asked not to have her identity or location revealed, told The Epoch Times that she wanted to come forward about things she observed and heard during a three month stay at the First Affiliated Hospital of Chongqing Medical University in the winter of 2006.

“One day I saw seven police cars entering the hospital premises from a side entrance. Getting out of the cars were 20 policemen in plain clothes,” she said, guarding seven handcuffed men and women, of around 30 to 40 years old. “All of them looked very healthy,” Li said.

The individuals were taken into an old two to three story building with a steel gate and two rows of plainclothes officers in front of it, Li recalled. “They were all forced into the building,” she said.

This reporter spent four years in Chinese prisons as a prisoner of conscience and, based on that experience, the prisoner transport described by Li is unusual. Male and female inmates are typically not transported together—they are managed by different prison staffs. Also, sick prisoners are treated in an outpatient unit, not in an old, abandoned building.

This student also told Li that a fellow student, whom he was close to, was always on operating room duty and had become a “butcher.”

“All he knew now was how to kill people with his scalpel, and he became insensitive,” the student told Li.

The First Affiliated Hospital of Chongqing Medical University is a state-run “Grade A tertiary” general hospital. It states on its web site: “Our hospital is the only local hospital in Chongqing that has the licenses to conduct both liver and kidney transplantation, resulting in advanced and superior technology of organ transplantation.

A member of the cleaning staff at the hospital told Li: “The doctors here aren’t performing operations, they are in fact killing people. The blood is splattered everywhere, all over the floor of the operation room.”

He said they are using hoses, and it still takes two hours to clean an operating room. “How can this be called a medical operation? It seems more like brutal murder to me,” the man told Li.

The man also told Li that operations are performed on the third and fourth floor in the building opposite the Inpatient Department building.

A former Uyghur surgeon in China, Enver Tohti, said in a telephone interview that the idea that there was a lot of blood in the operating room seemed normal. “With a prisoner, there’s no need, and no time for you to care how much blood will come out. What you do is just go straight to the organ and take it, that’s it.” Tohti, however, could not understand why it would take two hours to clean up.

After reviewing the entire witness statement, in its original Chinese, Tohti said that he was not surprised by the scenario depicted. “There are no surprises here,” he said. Tohti was a surgeon in Xinjiang and himself was called on to remove the organs from a recently-executed prisoner, right near the execution ground. “That is something that is haunting,” he said.

Dr. Zhang worked for a long time in the logistics staff of a hospital in mainland China. Now in Bangkok, he told The Epoch Times that it is not common for the operating room floor to be covered by that much blood during an organ transplant.

“Usually that does not happen,” he said. “When performing an operation, the doctors have a hemostatic plan, such as using hemostatic pliers and clips to stop the blood. If the floor is covered in blood, then it is a case of medical malpractice. It definitely does not happen often.”

Li also said that she repeatedly witnessed four to five men in the middle of the night pushing gurneys with corpses into a restricted elevator.

“Nobody was using that elevator during the day,” Li said. She said she had wondered if there was a secret passageway behind it.

The corpses on these midnight gurneys were tightly wrapped in multiple layers of green blankets, Li said. “Normal” corpses were never wrapped in such a way, and they were always transported on the regular elevator, she said.

“The bodies from the forbidden elevators were not meant to be seen, maybe those were the bodies of the victims of organ harvesting,” she added.

Eyewitness reports of forced organ harvesting in China are difficult to obtain, say Canadian lawyers David Kilgour and David Matas who are the authors of a 2006 independent report into the allegations of organ harvesting from Falun Gong practitioners in China.

“There are no surviving victims to tell what happened to them. Perpetrators are unlikely to confess to what would be, if they occurred, crimes against humanity,” the report says.

However, they say they have collected many points of circumstantial evidence, including very short waiting times and a surprising number of admissions through investigator phone calls, that paint a “damning” picture.

“Hospital web sites in China advertise short waiting times for organ transplants. … If we take these hospital’s self-promotions at face value, they tell us that there are a large number of people now alive who are available on demand as sources of organs,” the report says.

Based on their research, Kilgour and Matas estimate that from 2000 to 2005, 41,500 organs were harvested for which the most likely source was Falun Gong prisoners. Kilgour and Matas have each said on various occasions since their report was issued that the practice of organ harvesting from Falun Gong practitioners and other prisoners of conscience is continuing in China.