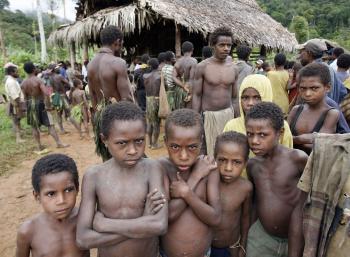 Children from the primitive Andai tribe of hunter-gatherers wait for their parents to vote at the Kaiam village polling station in the East Sepik Province during Papua New Guinea's general election, July 5, 2007. PNG is the most culturally diverse nation on earth with over 800 languages spoken by the population of nearly six millionâ��many of whom are living in extremely remote highland and island communities. (Torsten Blackwood/AFP/Getty Images)
World

Cholera, which has not been seen in PNG for over 50 years, was first reported in the remote northern province of Morobe in August this year and claimed 40 lives. It has now spread 500 kilometres (310 miles) west of East Sepik Province, says Oxfam, with over 335 cholera cases reported in the East Sepik Province, and new cases confirmed in the provincial capital of Wewak. Eight deaths have been confirmed with the number expected to rise.

Oxfam’s Sepik Program Manager Andrew Rankin said, “People here rely on the Sepik River for drinking and washing water, for income from their fishing, and for preparing sago to eat. Water samples tested by the WHO [World Health Organization] have confirmed that cholera is present in various locations along the lower Sepik River. This is a major concern for communities—for their health, and also for the potential it has to affect their livelihoods,” said Rankin.

“There is currently a lot of fear in communities in the Sepik about the outbreak, including in the provincial capital of Wewak. It’s important that these communities get immediate help to deal with the outbreak,” he said.

Cholera is usually spread through contaminated food or water and can be fatal if not treated.

“Oxfam continues to work closely with other agencies and local health authorities to try to contain the outbreak. But cholera does spread quickly, and the challenges involved in reaching remote communities mean we need all stakeholders—local and national governments, donors and other agencies—to focus their efforts on tackling the outbreak quickly and ensuring people here get the support they need.”

The PNG government declared a public health emergency and committed US$4.6 million to combating the disease in September this year, but none of the promised money has been released, reported the Australian Broadcasting Commission.