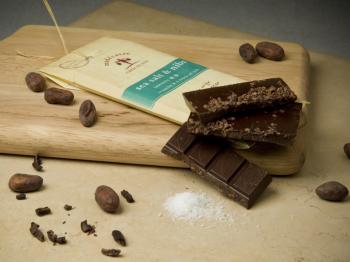 Chocolate made in Madagascar: A Labor of Love (Photo Gallery)

Diana Hubert
View profile
Follow
biggersmaller
Print
NEW YORK—Working with high-quality chocolate has never been quite as sweet as it has been for Joe Salvatore, one of the core members of Madécasse, a unique Brooklyn-based chocolate company with an aspiration to make a difference.

From the moment a long stick is extended to strike the cacao pod to the ground until the final ribbon is individually placed on the packaging, every step of production of these fine chocolates takes place in Madagascar, providing locals with jobs and fostering growth in local communities. (Click to see Photo Gallery )

Salvatore exudes a tremendous sense of passion while talking about what he calls his “dream job.”

His face lights up while browsing through the pictures of cacao farmers in the Sambirano Valley located in northern Madagascar, where cacao has been harvested for centuries. The stunning scenery and local people, whom he knows by name, serve as a reminder of the drive behind the project.

The four-year-old company was started by Bret Beach and Tim McCollum, two former Peace Corps volunteers who had spent time in Madagascar working with local farmers. While flipping through a magazine, Salvatore immediately became excited upon seeing a story about the two. Having been a Peace Corps volunteer in Madagascar himself, he felt an instant connection to them.

“I immediately wanted to meet them,” he recalled.

While 80 percent of cacao comes from Africa, less than 1 percent is actually produced there—the final products are generally processed in North America or Europe, closer to the markets, Salvatore said.

The Madécasse team, however, not only works with the farmers to get a high-quality cacao bean but also keeps the whole production process in Madagascar. A local, self-taught Malagasy chocolatier, whom Salvatore calls “very talented,” blends the chocolate to make an array of tasty concoctions. Each piece is then packaged at a factory in locally designed wrappers.

“It’s a really different process than you’ll find from most other companies,” Salvatore said. “It’s like a family-run business. You know the people who work there, [down to] the ladies who wrap up the little bow.”

Working with Madécasse has made him feel that he is making a difference for the people he fell in love with during his Peace Corps experience, Salvatore noted.

“You get there and you realize [that] it’s one person against this giant wave of poverty and an unfair system, and you feel helpless,” he explained. “I don’t think I realized the effect business can have on bringing people out of poverty until I actually saw what it was like.”

“The three of us, combined, have spent about 10 years living—and loving living—in Madagascar, and I think we’ve all settled on this idea that this is how you do it, this is the start of hopefully a much bigger trend in changing poverty, in changing the world,” he added.

Without a strong culture for production of finished products, the endeavor has certainly been challenging, Salvatore noted.

“It was very difficult to get anything like this started. You’re going to deal with a lot of bureaucracy and red tape and things you can’t really control—things getting stuck at customs and getting people to understand what you’re trying to do,” he said.

“We [also] can’t be there all the time to supervise, and we really have to trust our partners there. Part of that is our experience with Peace Corps and living there and knowing how it works, understanding how the culture is and knowing who to trust and how to talk to them. … It’s hard, but it’s easier because we know the farmers, we know the chocolatier, we stay connected,” he continued.

He notes that another challenge has been helping the chocolatier and the local production team realize how to make chocolate for an American market and palate. The few local chocolate products are much different, he notes. He recounts bringing the finished chocolate products back to the farmers and having the kids try little pieces of it. “They were really surprised,” he says.

The rewards however, greatly supersede the challenges. “We see a lot of ownership. There’s a lot of pride in your being with this company. The farmers are in cooperatives and that gives them the network to share ideas and so it creates a community; that’s a great benefit,” says Salvatore. He notes that what the workers receive goes beyond fair trade and sustainability. “This is a step beyond that. This is saying it’s not just enough to get a fair price, you have to have a high quality product and you want to give them skills and have those relationships where you’re encouraging more revenue and more growth throughout the process.”

In the United States, Madécasse has been growing and Salvatore says the response from consumers to both the chocolate and the story has been very positive. “We’ve had a lot of interest,” says Salvatore. “I noticed a lot of people write in on the comments and really appreciate it, or 'my kid studied this in school’ and they very excited.” Currently the chocolates have been picked up by over two hundred specialty stores and larger retailers like Whole Foods across the country.

“This is a dream job for me,” said Salvatore. “I know it is for Brett and Tim as well, they really wanted to make a difference and get their hands dirty to make it happen.”