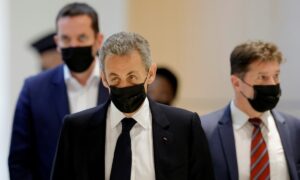 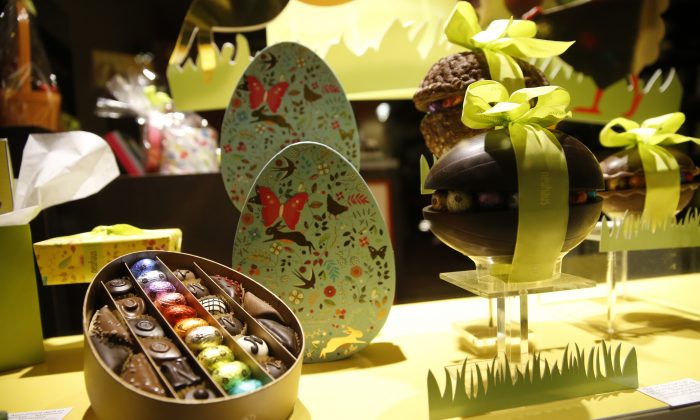 Chocolate Easter Eggs on display in a shop near the EU Commission in Brussels on March 26, 2016. While chocolatiers throughout the city are quick to offer condolences to the victims of the tragedy, they are equally fast to express concern about the future. Their livelihoods depend on people from around the globe streaming into their shops to indulge in their world famous goodies, and they know tourists don’t go anywhere to be afraid. (AP Photo/Alastair Grant)
Europe

BRUSSELS—At the aptly named Planete Chocolat, the shelves are laden with enticing Easter treasures for shoppers: bunnies with bows, pastel-wrapped eggs and elegant boxes of pralines.

Swannee Vranckx, a clerk at the shop near Brussels’ main square, said she would normally have seen 50 to 100 customers by midafternoon in the days before one of the biggest holidays of the Christian year. But after the bombing attacks that shattered the tranquility of Belgium’s capital, only a handful had come in search of Easter treats.

While the city’s chocolatiers are quick to offer condolences to the victims of the tragedy, they are equally fast to express their concerns about the future. Their livelihoods depend on people from around the globe streaming into their shops to indulge in their world-famous goodies—and they know that tourists don’t go places they don’t feel safe.

“I’m sure it will happen—people will cancel their trips,” Vranckx said. “They think it is a place for terrorists.”

The March 22 attacks that killed 31 people and wounded 270 are only Brussels’ latest brush with violence. Just days before the bombings, Belgian and French police arrested Salah Abdeslam, the chief suspect in the Nov. 13 attacks that left 130 people dead in Paris, in his Brussels hideout. In May 2014, three people were killed when a gunman targeted the Jewish museum of Belgium.

The notion that Belgium, a small Western European nation of 11 million, might become known for terrorism is shocking to many here. This is a place where U.S. President Barack Obama says it was “easy to love a country known for chocolate and beer.”

And at Easter, the nation’s sweet tooth is on full display: shop windows are crammed with chocolate. Belgians are said to eat more than 8 kilograms (17.6 pounds) of the stuff every year—ranking them among the world’s top consumers.

The country traces its love affair with chocolate to King Leopold II’s control of the Congo in the late 19th century, which provided the country with a ready supply of cocoa. Things really began to take off after 1912, when the son of a Swiss pharmacist created the first filled chocolates, which he called pralines, at his family’s Brussels factory.

Today, Belgian chocolatiers ship their wares around the world and Brussels shopkeepers compete with artistic window displays in hopes of luring in tourists on their way to the art museums or the Grand Place, the UNESCO world heritage site.

This year, not far from there, residents and visitors alike gathered to remember the victims and scrawl messages of sadness and hope in the aftermath of the attacks.

The bombings will cut consumer spending on recreation, leisure and tourism but they are likely to have only a short-term impact on the whole Belgian economy, according to Francesca Peck, an economist at IHS Global Insight in London. The losses may be magnified because the attacks occurred so close to the long Easter weekend, when restaurants and bars are typically busy.

As a result, the Belgian economy is expected to grow 1.45 percent this year, down from a previous forecast of 1.6 percent, IHS estimated.

But the slowdown will probably be temporary, as it was after the November attacks in Paris, where shoppers refused to change their habits in the face of terror threats, Peck said.

“As terrible as the events in Brussels have been, economic activity is typically pretty resilient to terrorist attacks,” she wrote.

Belgians, though, are worried about what this means for the longer term—will people in Japan, the United States and China change their minds about visiting their beloved cobblestone streets and classic European cafes? Shopkeepers were just beginning to hope things were about to improve as the months after the Paris attacks had passed uneventfully.

Now all bets are off.

At the sleek Neuhas chocolate shop near from the Grand Place, manager Tim Verstraeten could only shake his head.

“We don’t know what is going to happen,” he said.