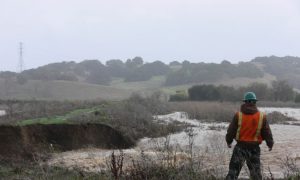 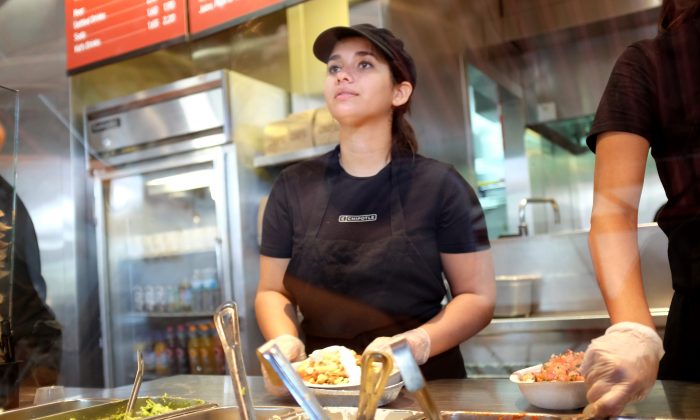 A restaurant worker fills an order at a Chipotle restaurant on March 5, 2014 in Miami, Florida. (Joe Raedle/Getty Images)
Business

Chipotle says that there’s no “quick fix” to the current pork shortage, which has forced some of the chain’s locations to temporarily remove carnitas, or shredded pork shoulder, from the menu.

“I think the biggest misconception is that there is a quick fix to this. Given constraints to our current pork supply and the timelines needed to raise more pigs, there isn’t a quick fix,” spokesman Chris Arnold told the Epoch Times via email.

Pigs take about six months to raise. Chipotle’s standards for pork require suppliers to raise pigs outside or in deeply bedded pens with plenty of straw, without antibiotics, and on a vegetarian diet.

The company boasts on its website that it has sourced 100 percent of its pork since 2001 from producers who follow these guidelines. “We believe pigs that are cared for in this way enjoy happier, healthier lives and produce the best pork we’ve ever tasted,” it says on the site.

The pork shortage was highlighted by Bloomberg earlier this month, about three months after Chipotle cut ties with a major supplier after a routine audit uncovered problems.

Fewer than 5 percent of the pigs in the United States currently meet Chipotle’s standards. Because the company only uses the shoulder, suppliers have to find buyers who are willing to pay a premium price for the rest of the pigs.

Fast Food Being Sold in Dozens of US Hospitals (+Map)

Chuck Wirtz, a farmer in Iowa who raises both premium and conventional pigs, said that it takes four times as long to care for premium pigs, and barns can be twice as expensive.

“We as farmers have always responded to what the market wants,” Wirtz said. “There are added costs to raise pigs that way. And up until recently, the market has not been willing to pay for that.”

Many of the top producers of pork in the United States don’t produce pork that meets Chipotle’s standards. Smithfield Foods, for instance, stopped producing antibiotic-free pork due to insufficient return on the premium, and Cargill sells antibiotic-free pork but its pigs don’t have access to the outdoors or deeply bedded barns.

Chipotle management is exploring a range of options, Arnold said, such as looking into using other cuts from pigs and asking existing suppliers to ramp up production. The company has used imported products in the past, such as grass-fed beef from Australia during a shortfall, indicating another possible solution.

Analysts told Bloomberg that the company may have to scale back plans to open as many as 205 new restaurants this year due to the sourcing struggle and higher prices, even though in-store sales jumped more than 16 percent in the fourth quarter.

“The company may be forced to slow its store growth if it can’t evolve new relationships with ‘sustainable’ suppliers quickly enough,” said Asit Sharma, an analyst at the Motley Fool.

Arnold said Chipotle management remains optimistic. “As much as we might want it, there isn’t a switch that allows us to have all of the ingredients we want, raised to the standards we think are best, overnight,” he said. “It takes time, and our track record driving change in this area is unprecedented.”