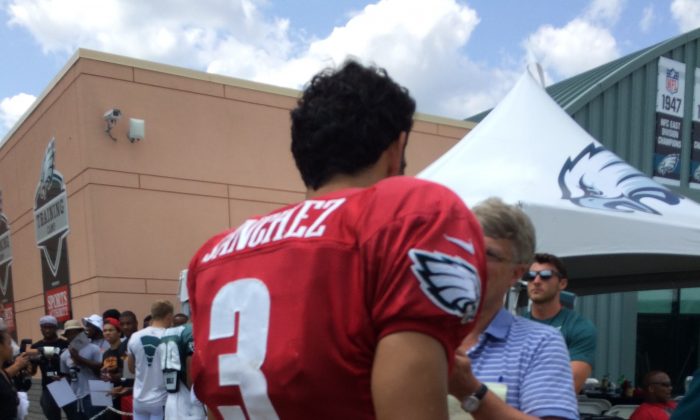 Chip Kelly And Nick Foles Impressed With Sanchez At Camp

PHILADELPHIA (July 30th, 2014) – On the 4th day of training camp, 2nd year head coach, Chip Kelly addressed the media before camp and one of the questions that arose were what are his observations of QB Mark Sanchez.

Sanchez, 27, was brought into the Eagles organization this offseason after being released by the New York Jets – whom he’s been with for 5 seasons. The deal happened days after the Eagles released QB Michael Vick who is now a member of the Jets.

Coach Kelly mentioned the torn labrum that Sanchez tore back in the third preseason game against the Giants last year that placed him on IR for the remainder of the season. However, Chip says that Sanchez has been outstanding ever since he joined the team and that he learned the offense quickly in OTAs and camp. In his career, Sanchez has over 12,000 yards, 68 touchdowns, 69 interceptions and a 71.7 quarterback rating.

“I think Mark has been outstanding since he’s been here,” Chip said at NovaCare before the Eagles’ training camp commenced. “He was coming off of a shoulder surgery in the spring, earlier we were monitoring him to see how his shoulder was coming along and he’s picked up things quickly. He’s making a lot more quicker decisions than he did in the spring and I think he’s really starting to feel more comfortable with what we’re trying to do.”

Conversely, QB Nick Foles spoke with the media after camp to talk about numerous topics. Foles is coming off of a memorable 2013 season after replacing QB Michael Vick’s starting job. Foles finished the year with 2,891 yards, 27 touchdowns, 2 interceptions with a 119.2 quarterback rating.

Foles, however, talked about what he’s seen out of his teammate and mentions what he knows that Mark can bring to the table.

“Mark’s played a lot of games, had a lot of success and he’s dealt with a lot of adversity,” Nick Foles said. “I think the big thing about Mark is learning what he’s gone through, watching his footwork, and he’s a guy with great fundamentals. He makes really smart decisions and it’s been great learning with him on the field.”

Sanchez is currently competing with QB Matt Barkley for the backup role to QB Nick Foles in training camp.

The Eagles open up their preseason on the road against the Chicago Bears on August 8th, 2014 at 8:00pm ET.