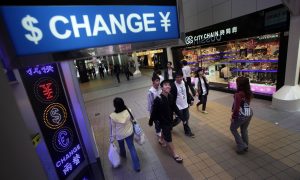 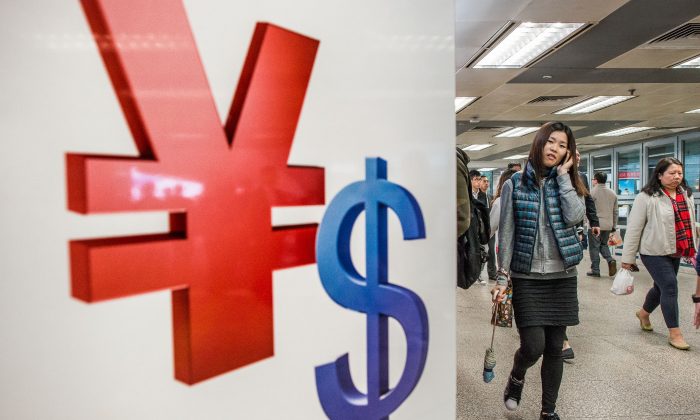 China’s yuan crashed against the dollar on Jan. 30 in offshore trading, spurring rumors that a central bank action to devalue the currency could be imminent.

Offshore yuan’s valuation dropped to 6.28 per U.S. dollar in New York Friday afternoon, which is a two-year low. The rate is also 2 percent lower than the official midday fixing by the People’s Bank of China (PBOC), China’s central bank.

When there’s a spread between the official and offshore rate, it usually signals a dislocation in demand for the currency between mainland and offshore traders. It could also means that traders are predicting a policy action in the near future.

The U.S. dollar’s recent surge prompted central banks of many export-oriented countries to cut rates and weaken their currencies.

Lowering interest rates could stimulate lending and investments, while a weak currency could spur demand for that country’s goods and products.

That puts the PBOC in a tough spot. So far, the PBOC has tried to rein in such lending to curb bad debts and slow down certain overheating asset classes. But the country’s export-driven economic engine has stalled in recent months, and given the recent export-friendly moves by its competitors Japan and Korea, the PBOC may have no choice but to take action.

The yuan has already been pressured by asset conversion undertaken by wealthy Chinese. Locals recently rushed to convert their yuan-denominated assets into dollar-denominated investments.

The disposition of yuan-denominated assets has been a concern for the Chinese Communist regime. So much so that the government has urged caution for anyone considering to sell their yuan assets. On the Chinese-language China Business News, a report noted that U.S. dollar-denominated notes generated 1.2 to 2.5 percent in annual returns, while yuan-denominated products had returns of 3 to 5 percent.

But most astute investors in China probably already know that the stability and appreciation potential of dollar-denominated assets would likely trump most high-yielding yuan-denominated financial products, risk-adjusted.